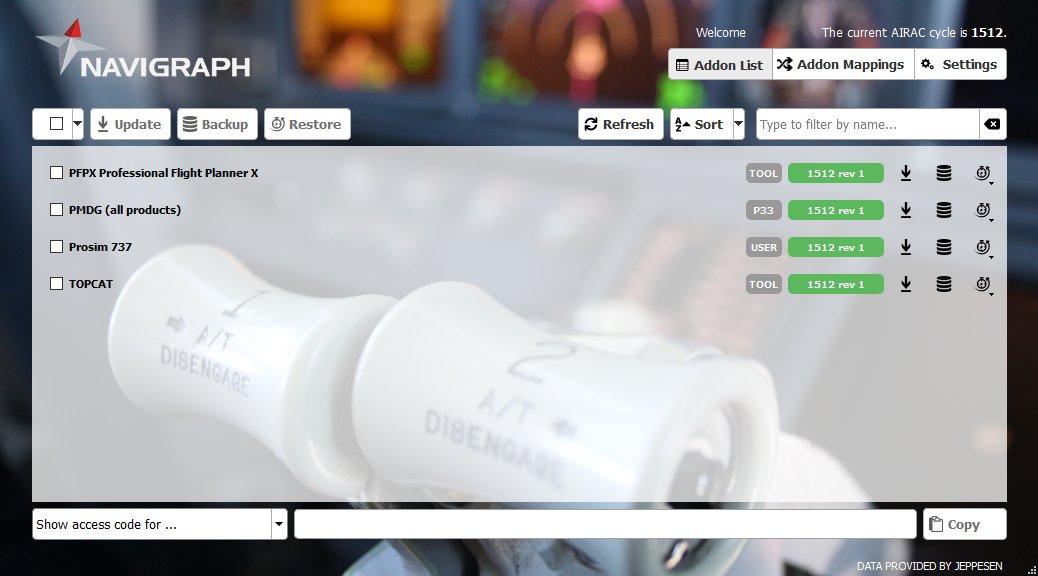 Navigraph Manager is an application, created by Navigraph KB based in Sweden, that allows you to easily manage your flight simulation FMS data in multiple formats with one simple user interface. Navigraph is a supplier of navigational charts/FMS data to the global flight sim community. This article is based on Navigraph FMS Data Manager version 1.2.0.1013 for Windows.

The source of aeronautical navigation data in each country is typically that country’s government. These entities create Aeronautical Information Publications (AIP). AIP are defined by the International Civil Aviation Organization (ICAO) as:

“A publication issued by or with the authority of a State and containing aeronautical information of a lasting character essential to air navigation.”\

There are thirteen AIRAC cycles each calendar year and they are referred to by the last two digits of the year and the cycle number. So, for example, the fourth cycle of 2015 would be designated as 1504. As of this writing (late November 2015), the current AIRAC cycle is 1512.

The chart data provided by Navigraph is supplied by Lido/Lufthansa. It is available via a desktop application, the Navigraph Charts Cloud website, or the Navigraph Charts iPad/iPhone app.  Navigraph Manager does not manage any charts. I just wanted to mention it and you can find more information in my separate Choosing Your Charts article.

The FMS data provided by Navigraph is supplied by Jeppesen. Jeppesen is a subsidiary of The Boeing Company and is based in the United States. They are a renown provider of aviation navigation data around the world.

The Jeppesen data is then formatted by Navigraph for your respective FMS/add-on type. Being able to match all my navigation databases is why I use this Navigraph Manager application.

Navigraph Manager covers a huge list of flight simulation add-ons, including but not limited to:

If you have many of these add-ons, Navigraph Manager is the solution to keep all of their navigation data in sync and updated. You can still manually download and install the FMS packages from Navigraph, but this is what we are trying to avoid.

This Navigraph Manager software is free to download, however, using the Navigraph service requires a paid subscription. Since the real Aeronautical Information Regulation And Control (AIRAC) cycle data is updated frequently, you can purchase subscriptions ranging from 30 days to a full year of unlimited cycle updates.

The 1 year subscriptions are renewable and the renewal costs are about 10% less after the first year expires.

There are no drivers or manuals, but there is a dedicated Navigraph Support Forum covering all of their products.

No assembly required. Simply install into a dedicated directory.

Once Navigraph Manager is installed, you need to login with your Navigraph credentials to access your subscription. It can scan for known add-on locations, and you can manually include other Addon Mappings as needed.

In my case, I have PFPX, PMDG, ProSim737, and TOPCAT installed and added to Navigraph Manager. It will report the current AIRAC version found. Then, it is as simple as clicking the update button for each and let it do it automatically. If you use an online service, such as SimBrief, you can also create an access code to unlock the current AIRAC cycle.

Navigraph provides ongoing support via their online Support Forums. They appear fairly active, but I have yet to require them.

Before Navigraph manager was available, I used to download and install each FMS package manually. Without opening each application, it was a mess trying to figure out what AIRAC cycle they were all on. Using Navigraph Manager made it fast and easy to update them all to the same cycle. It works perfectly and ensures my flight planning, performance calculations, and the flight itself are all up to date. For these reasons, I give Navigraph Manager a perfect score of 10 out of 10.