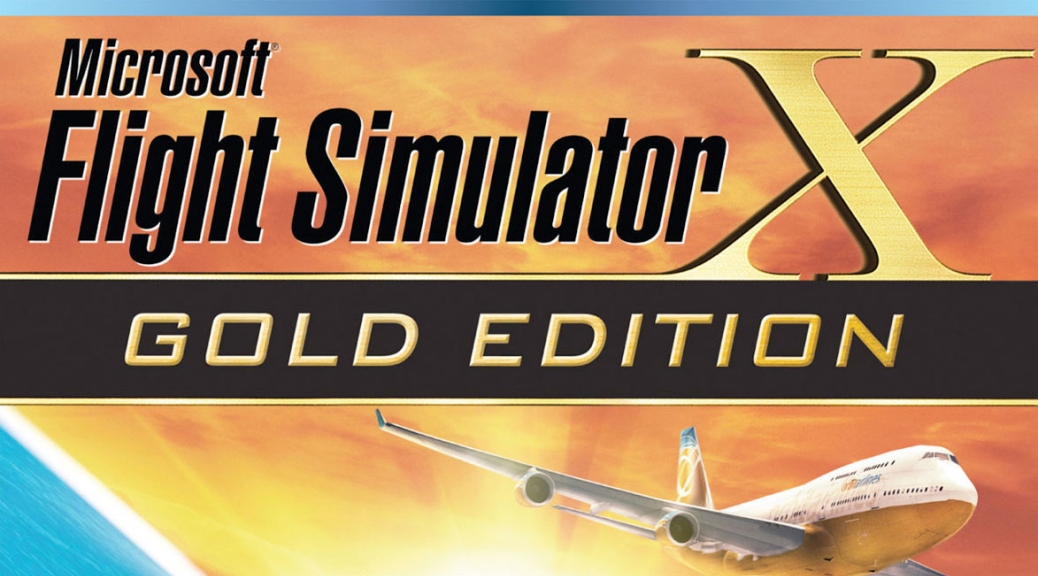 Microsoft’s Flight Simulator X (FSX) is the tenth edition of their flight simulation software for PC released in 2008. The Gold Edition is the last available release and includes the Deluxe and Acceleration Pack components.

The PC Gold Edition of Microsoft Flight Simulator X (FSX) contains three DVDs including Disc 1 and 2 of FSX Deluxe and a Disc containing the FSX Acceleration Expansion Pack. Activation Keys for both are on stickers inside the case. The product was not damaged and all expected items were included.

Inside the DVD case are three booklets:

FSX Quick Reference – This graphically describes the default button/axis assignments for Joystick, Mouse, and Xbox 360 Controller for Windows. It also covers The Basics of Flying Any Airplane, an overview of simple flight.

The manuals are simple, easy to read, and included graphical depictions of the software and usage. They reference the Microsoft Games website and the old FSX site FSInsider (which has not been updated since 2009).

TIP: Do not install FSX into the default C:\Program Files (x86) folder as Windows puts special security permissions on it that will cause you many headaches later. Install FSX elsewhere, such as C:\FSX, or even better, to another drive on your PC.

TIP: FSX is a 32-bit program, but the FSX community recommends using the Windows 7 64-bit Operating System for its superior memory management and is better supported than Windows XP or Vista.

Installation is pretty straightforward. Start with Disc 1 of FSX Deluxe, move on to Disc 2 when prompted. I then started FSX and let it get to the start screen. Next, I closed FSX and rebooted the PC before installing the Acceleration pack.

FSX uses mouse-driven menus and it is quick and easy to get flying fast. The included “Flight School” will walk you through flight from the basics of “straight and level” to more advanced topics such as radio navigation and night operations. It uses a pre-recorded voice as your flight instructor to walk you through each step.

I cannot speak about the missions as I never used them.

The Settings section allows you to control the graphics, sound, control inputs, realism, and scenery to a pretty granular level. From the level of aircraft and terrain details (autogen) to shadows and Artificial Intelligence (AI) Air, Sea, and Road traffic levels, FSX has many sliders and values a user can adjust to their preference or PC hardware capabilities.

By default, FSX visuals are based on DirectX 9 (DX9), but with SP2/Acceleration, one can “preview” DirectX 10 (DX10) but with some caveats such as blurry textures, blinking or missing textures, lighting anomalies, etc. Various FSX community members have come up with fixes to some of them, but I am using DX9 for now.

It is worth noting that the native multiplayer support died when the GameSpy network was shutdown in December 2012. When FSX was re-released on the Steam Network by Dovetail Games, they added the multiplayer functionality back into the game.

Microsoft released FSX in 2006, and the Acceleration Expansion Pack in 2007. Soon after, Microsoft laid off their flight simulation team (Aces Studio) during budget cuts and no further development was performed on FSX. The only ongoing active support is from the various FSX online communities and not from Microsoft.

FSX in vanilla form out of the box is still a quite advanced, albeit older, flight simulation software. There is a good selection of aircraft, decent flight dynamics modelling, thousands of airports around the world, and a basic Air Traffic Control (ATC) system.

FSX has many things to be positive about, such the scope of the game, selection of aircraft, and decent visuals and models. The downsides are largely based on the age of the software, such as the 32-bit limitation (it can only use up to 4GB of RAM), outdated scenery, and lack of active manufacturer support. For these, I give Microsoft Flight Simulator X a score of 7 out of 10.

NOTE: This score is for the untouched FSX/Acceleration install running on my i5-2300 2.8GHz and GeForce GTX760 video card. There are many options available to improve almost every facet of FSX, from aftermarket software to editing FSX configuration settings & files.