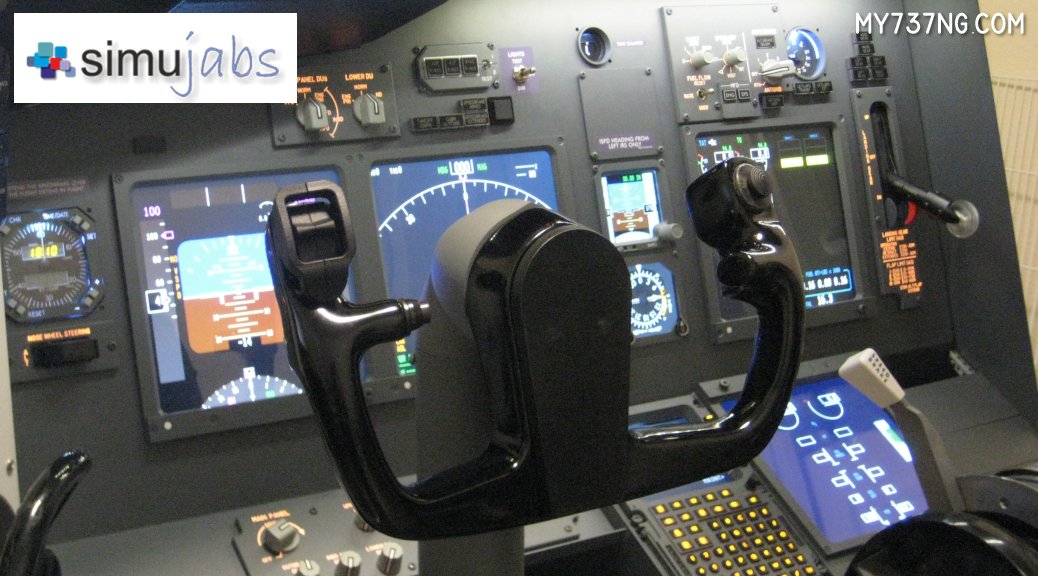 The Simujabs B737 Single Yoke Control Column is a cockpit hardware device for flight simulation designed to replicate the flight control yoke (control wheel) found in the Boeing 737. Simujabs is based in Mallorca, Spain and the product was shipped to the United States.

I have always wanted to replace my Saitek Pro Flight Yoke System after installing my JetMax SKTQ MIP. In a 737 cockpit, the Saitek yoke looks odd, takes up a lot of space, and blocks the lower part of the PFD/ND displays. I did consider buying real 737 yokes, but I only have a single-seater right now, don’t have the under-floor space for them, nor did I want to convert them.

I did seriously consider the Precision Flight Controls (PFC) yoke as well, but the PFC yoke uses a weird square column, only rotates 90° total (same as the Saitek), and was $500 more, so I ended up selecting Simujabs. If you are interested, I did write up these findings and more in my separate article – What the Yoke?

This Simujabs Yoke was ordered via the Simujabs website in mid-May.

I exchanged emails with Simujabs for about a week before I decided to place my order. Simujabs does not require payment until they are ready for ship, but due to the volatile Euro-Dollar conversion rates, I chose to pay in full right then. I was originally quoted 4-5 weeks build time, and perhaps only 3 weeks if their laser-cut supplier was ready.

I also asked Simujabs if they could incorporate a 4-way hat switch into the other side of the yoke where the trip reminder would normally be. I wanted to retain the “pan view” function that I had on my Saitek yoke. Simujabs said they had done this request before and would be happy to add it, but it may add some additional build time. This was no problem.

Unfortunately, Simujabs continually suffered from a long list of issues and delays, and the yoke did not arrive until four months later. They did promptly answer the emails I sent every few weeks asking for updates, but only sent one update on their own. This made the long wait a bit frustrating and disappointing.

I ordered this Simujabs Yoke and my Simujabs Rudder Pedals at the same time. The pedals themselves were finished in about 2.5 months, but I chose to wait to have them sent together to save shipping costs. Eventually, they were both shipped via DHL and arrived 3 days later.

The yoke arrived in a sturdy wooden crate marked FRAGILE. The box was sturdy and there was no visible damage to the outer packaging.

Once opened, I found the yoke base securely bolted to the crate with a wooden cross member and zip tie holding the yoke column in place. Bubble wrap covered the yoke handle and where the cross member was making contact against the column.

I removed the yoke from the crate and gave it an initial inspection.

It appeared to be in perfect shape, but I did find a small bolt loose in the bottom of the shipping crate. This was one of the bolts that holds the stab trim switch in place. It appeared to have come out during shipment and was easily put back in where it belongs.

The Simujabs Yoke uses a SimIO USB Joystick interface card to connect to your computer. You can get any drivers, manuals, and software for SimIO products from the SimIO website if needed.

It does not come with any manuals, nor are there any online.

The Simujabs yoke was completely assembled right out of the box. The base assembly is all metal and seems very well made. The column is stainless steel and powder-coated. The upper yoke elbow appears to be a heavy duty molded plastic or resin material and painted to match. The colors appear to be a good replica of RAL 7011 “Boeing Grey”.

NOTE: Simujabs provided me some pictures during the assembly phase, so I will use them here to describe the product details. The yoke does NOT come to the customer this way, it is fully finished when you receive it.

The Simujabs yoke itself is made of fiberglass resin and painted in gloss black. It rotates nearly ~180° from left to right which is very close to the real thing (the actual 737 yoke rotates ~215°).

The Stab Trim switch is a single 3D-printed rocker that is shaped correctly. However, it is not a split dual safety switch as found in the actual aircraft. The Stab Trim guard is also a 3D-printed piece and appears to be the correct shape and size. The Autopilot Disengage push button is in the correct place and of good quality.

The PTT microphone switch is a 3D-printed rocker with a single push button switch behind it.

The newer 737 planes actually have a two-way rocker here that allows the pilot to transmit on either the COM Radio or Interphone. Looking at the the switch housing Simujabs uses, it seems like they could have used two push buttons here if they wanted to.

The custom optional 4-way hat switch has a conical cap, feels great, and adds some needed functionality. I wasn’t sure how this would come out, but it blends in well and almost looks like it belongs there.

There are 4 holes pre-drilled in the yoke base to mount it to your platform surface.

NOTE: If you also have the Simujabs Rudder Pedals like I do, you will have to drill two additional holes in the yoke base to account for the pedals’ aft mounting points.

The inside edge of the yoke column should be 230mm from the CDU bay or typically centered in the footwell under the MIP. Check out the great 737 measurements PDF on Mark’s website for more information.

Now, if you hadn’t noticed, there are a couple things missing from the Simujabs yoke versus a real Boeing yoke:

First, there is no markings, placards, or lettering to be found on the Simujabs yoke. There should be a placard for the aileron trim units on the upper yoke elbow and lettering for the Stab Trim Nose Up/Dn, the Autopilot Disengage button, and the PTT microphone switch on the yoke itself. Since the yoke is resin, I understand why it cannot be engraved, but they chose not to use adhesive labels as they can wear and fall off. I am not sure I agree with this decision.

Secondly, there is no clipboard. Simujabs is working on their own clipboard, but it was not ready as of this writing. I chose instead to order a separate clipboard and hope it would fit. Check out my short Agronn Clipboard review for more information.

There is a single Mini USB connector at the base of the yoke that connects to your PC’s USB port using an included cable. Simujabs forgot to include my cable, but I have plenty laying around from old mobile phones I was able to use.

My Simujabs yoke came configured to use the SimIO SC-PASCAL7 Project Player software. Simujabs emailed this program and a specific custom .INI file to set all the calibrations and button assignments. They said it would also require an IOCPServer running.

NOTE: The ProSim737 Avionics Suite does natively support SimIO boards, but does not manage the flight control inputs yet. Either FSUIPC or FSX itself will be needed for this.

Since I did not want to install even more software on my main FSX PC, I decided to reprogram the SimIO board firmware to emulate a Windows USB joystick. You can get this ‘joystick’ firmware and the SC-PASCAL7 software from the SimIO website. To accomplish this, I needed to remove a panel cover from the back of the Simujabs yoke.

Next, I carefully pulled the panel cover and attached SimIO board out of the yoke base and connected the board to my PC. There is a small greed LED that lights indicating a good connection.

Then, I completed the following steps.

Now in Windows, I right-clicked on the new joystick called SIMIOJOY000059 and selected ‘Game Controller Settings’, then ‘Properties’. From here I tested all of the functions, and noted their assignments.

Once I had converted the SimIO board back to joystick firmware, I was able to simply use FSUIPC to set all the axis and buttons to the proper functions.

One curious setting I had to dig up was the FSUIPC Offsets for the Stab Trim yoke switches. These are the settings I used:

In the case of the custom pan view hat switch, I wrote up a separate article FSUIPC: Using a Hat Switch for Pan View on how to program it.

Pedro Bibiloni is the owner of SimuJabs and he directly answered all communication promptly, but had to be prodded a bit. The product has worked as expected so I have never had any support issues with Simujabs, but there have been a few misunderstandings along the way. This may be due to English not being his primary language.

The Simujabs yoke works very well, is silky smooth, and looks pretty darn good. Springs are used for resistance and there is no force feedback or autopilot control. It does use potentiometers instead of Hall Effect sensors, but that is OK. The yoke itself is not metal, but it seems quite strong, feels nice, and does not flex at all. I am pleased with the nice range of motion in each axis and the custom 4-way hat switch they installed for me. There are minimal dead zones and it centers fairly well, but you can feel the springs bind a little when you move it to the far extremes of travel.

The mechanical bits are extremely high quality and very solid. I believe this yoke will last a very long time. Overall, the yoke really adds a palpable feel of realism to my cockpit simulator. I will miss all the other buttons on my outgoing Saitek yoke, but this 737 yoke replica makes it all feel just a bit more authentic.

Speaking of buttons, both the Autopilot Disengage and PTT switches on the Simujabs yoke have little to no positive feedback. It would have been nice to feel some kind of “click” or detent, but that is just my personal opinion, not a operational issue.

In the end, the Simujabs yoke is an affordable, quality product that would please most simulator owners from a pure flight control perspective. Sure, the yoke is missing items such as the clipboard, all markings, and details like the correct Stab Trim switch design, but these omissions are likely compromises to help bring the price down. And, you simply can not beat this price for a Plug&Play replica 737 column yoke.

However, due to a delivery time that far exceeded the promised date, a forgotten USB cable, a loose bolt, and needing to drill the base for the matching Simujabs Rudder Pedals means I could only score the Simujabs Yoke Control Column with an 8 out of 10.

UPDATE: I have since heard from other Simujabs customers that they also waited about 4 months to get their yokes. It seems to be the typical wait time no matter what.