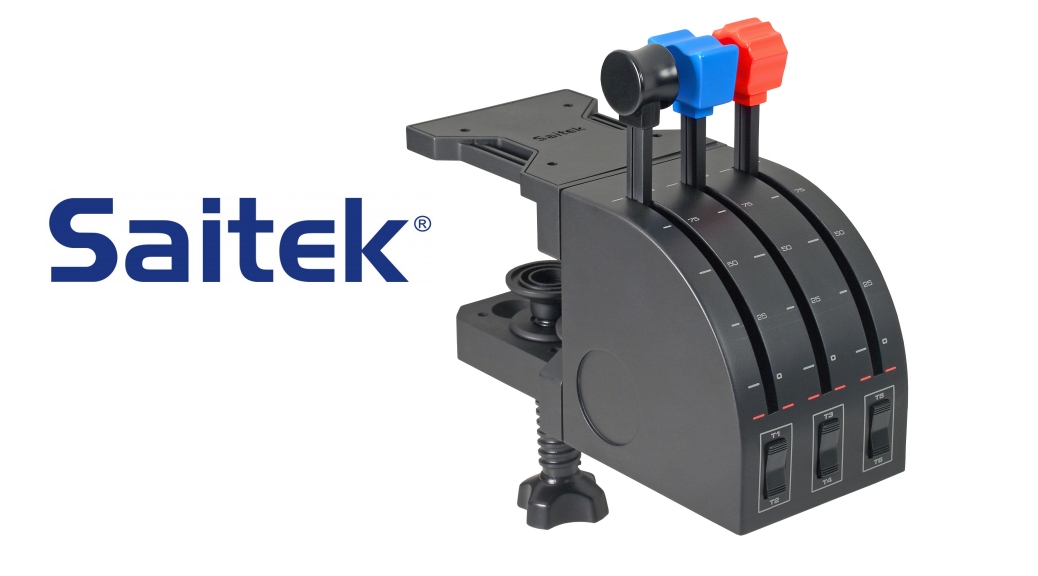 The Saitek Pro Flight Throttle Quadrant is a flight control setup for desktop flight simulation including 3 levers and 9 switches.

Fry’s Electronics lists the unit for $60, but I searched online, and they matched Walmart’s listed online price at checkout.

The throttle quadrant is completely assembled out of the box. You may need to configure the throttle mount as it can be adjusted to fit many different desk configurations. Once tightened, it is very stable.

The levers act as three axes: X, Y, and Z. At the bottom travel of each lever is a button usually used for reverse. There are three rocker switches under the levers with two buttons each for a total of 9 buttons.The knobs on the ends of the levers can be pulled off and swapped out with extra knobs included in the box. This is so you can customize the look and feel of each lever to suit your needs. The standard color-scheme in aircraft is:

A wide throttle handle that spans 4 levers was also included if you were to put this side by side with another Saitek throttle quadrant such as the one included with the Pro Flight Yoke. I like individual throttle controls, so I do not use it at this time.

Other than that, it is as simple as plugging in the USB cable.

I chose to go the DirectInput route and let FSX detect the device and allow me to assign axis and button functions within the simulator. There was no trouble completing this. I then configured the first two levers as Engines 3 and 4 throttles, and the third as flaps. (My Pro Flight Yoke throttle quadrant is spoilers, Eng 1 and 2 throttles) and sits to the left of this one.

I did notice that the movement of these levers does not match the levers that came with my Pro Flight Yoke. These levers have more resistance to movement, but the “reverser” buttons at the bottom of their range have a less positive feel.

TIP: Speaking of reversers, if you want the reverse thrust to work in FSX default aircraft, you need to assign the “button” that is pressed by a lever at the bottom of its movement range to “Throttle Decrease Quickly” button/key option in FSX (I also recommend setting Repeat to the first notch on the slider). Only one of the three can control this function normally triggered with the F2 key, so pick one; I used my Engine1 lever.

I’m told the third-party “SPAD” drivers can assign multiple reversers to their respective engine, but since it is not a lever to actually adjust reverse thrust, I just let them both operate together on a single button. With these throttles, and most aftermarket Throttle Quadrants, it is simply an on/off switch for reverse thrust and not variable.

ANOTHER TIP: If you want the reversers to work well with the PMDG aircraft, there is another trick I found for after you assign one of the reverser buttons in FSX. You will need to edit your Standard.xml file which is located at:

This resets the throttles to idle when you lift off the reverser button and stows the reversers within PMDG aircraft.

As with the Pro Flight Yoke throttle quadrant, if you want the buttons underneath the levers to act as your Engine Fuel Levers within PMDG twin-engine jets, you need to use the included Saitek Profile tool and program those buttons outside of FSX with these keystrokes:

If you do use a custom profile, remember to enable it via the System Tray icon before starting FSX as necessary.

This was purchased as an extension to the Yoke throttle quadrant I already had. This allowed me to use 4 of the 6 levers for spoilers, dual throttle, and flaps. The other 2 are set up for a 4-engine aircraft should I choose to fly one.

The device performs as good as the other throttles, but because it does not have the same resistance and reverser feel to match, I give the Saitek Pro Flight Throttle Quadrant a score of 9 out of 10.

UPDATE: I replaced the Saitek Throttle Quadrants when I installed the JetMax SKTQ cockpit system.