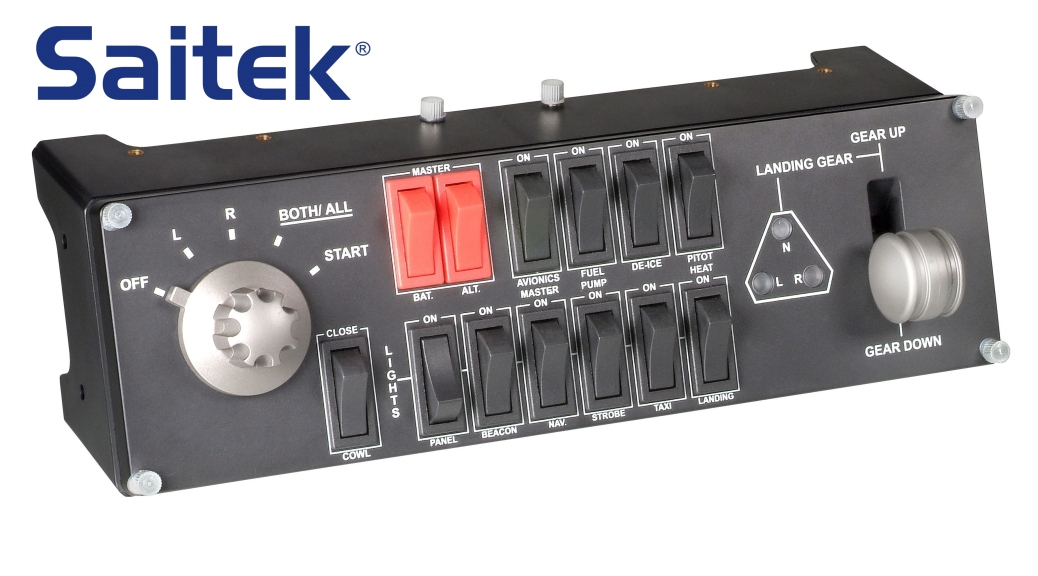 Fry’s Electronics lists the unit for $100, but I searched online, and they matched Walmart’s listed online price at checkout.

I seldom use the drivers included with a retail product as they are typically already outdated. Instead, I downloaded the latest drivers directly from Saitek’s website.

The drivers do include a graphical test program to verify connectivity of all switches, rotaries, and displays. Also included is a link to start the Saitek-FSX plugin if it does not start automatically for any reason.

The manual was simple, easy to read, and included graphical depictions of the device and usage. It references the Saitek website and the local US supplier MadCatz as well.

The Switch Panel itself is completely assembled out of the box, but a bracket with thumb screws is included for the modular mounting system if so desired.

The panel’s USB cable simply connects to the PC. In my case, I have it connected to my Yoke System’s onboard USB hub (which requires the yoke’s optional power adapter to power the panel).

I did not have to program any special settings within FSX and there is no “task bar” icon to set any custom profiles.

The switches on the panel are plastic rockers and have a nice, solid snap when used. The rotary starter switch has good positive indents, but does not spring back from the START position to BOTH/ALL as expected. The landing gear switch is short-throw and works very well. The landing gear lights work exactly as in the real aircraft with dual color red/green LEDs.

One big thing about this panel is that it really only works with General Aviation (GA) aircraft, such as the Cessna. Most of the switches don’t do anything when flying airliners. When used with an add-on aircraft such as my PMDG 737-800 NGX, the only switch that works at all is the landing gear switch and lights. However, I do still use it just for this feature.

I wish Saitek would have given me the option to custom program the switches to do what I want, regardless of their label. This would have increased its usefulness considerably.

TIP: There is a third-party developer Massimo who created an interface utility called SPAD (Saitek Panel Advanced Driver) that states it can give the user the ability to program the Saitek Radio, Switch, Multi, and BIP panels with custom operations via Pete Dowson’s FSUIPC. However, development stopped back in July 2012 with the v0.5.1 release. I have not tried SPAD and it is mentioned here as information only.

Each panel comes with a plastic bracket for mounting. This bracket is designed to be modular and connected to other Saitek brackets or to the top of the Saitek Pro Flight Yoke System. This is what I did, eventually stacking 3 brackets above each other (with the Saitek Radio Panels, attaching them all to the top of the yoke casing. There is some forward/back flex to my setup when mounted to the yoke, so I cut some wooden dowels and propped up the back of the brackets to stiffen it.

I purchased the Pro Flight Switch Panel about a month after the Pro Flight Yoke System. It requires little setup or instructions and has never failed to operate with FSX. The construction is durable and the design is easy to use, however, due the lack of being able to program the panel for use with all aircraft straight out of the box, I give the Saitek Pro Flight Radio Panels a score of 9 out of 10.

UPDATE: I sold this Saitek Switch Panel when I upgraded to my full CPFlight Forward Overhead and CPFlight Aft Overhead Panels.