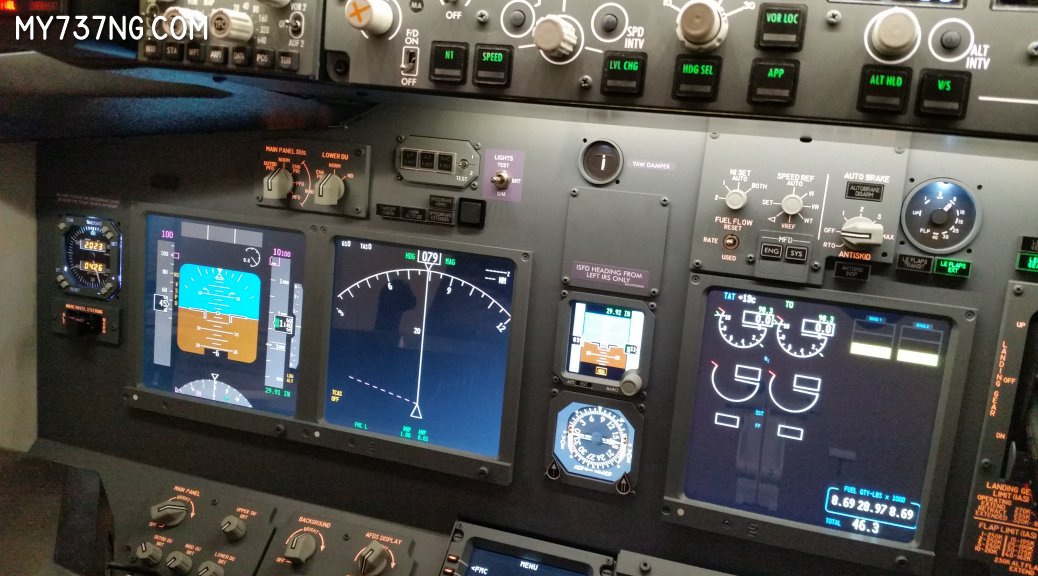 Flight Illusion gauges are cockpit hardware devices for flight simulation designed to replicate the gauges in the Boeing 737NG. Flight Illusion is a small company based in the Netherlands and Belgium and the product was shipped to the United States.

ORDERING / PRICE (in US Dollars, rounded up)

These gauges were ordered in late April via the Flight Illusion website.

Upon placing the order, I was quoted a delivery time of 4-5 weeks by Mark Verschaeren, the marketing/sales guy for Flight Illusion. He said their gauges are all custom built to order and the time may even be shorter.

However, after 6+ weeks passed with no contact, I reached out to Mark via email. He apologized saying they would leave the next Monday. Three days later, he emailed again saying there was another delay and they would ship Thursday instead. They actually went out the Monday after that and finally arrived here in late June, almost two months after ordering.

The package was a cardboard box, about the size of a large book, and appeared to have survived the trip over the pond very well. Once inside, I found all of the pieces individually wrapped and sealed under shrink wrap. I removed the parts from their anti-static wrapping and took a look at my new loot! Everything I ordered was there and in perfect condition.

There were no drivers or manuals included with my order, however, the software and manual are readily available from the Flight Illusion website.

The Flight Illusion gauges come already pre-assembled. They look well crafted and sturdy, include clear plastic lenses, and utilize stepper motors instead of servos. They are built as layers of circuit boards, gears, and resemble a square stack like a sandwich. I will detail each product a bit here.

Th GSA-55 is the heart of the Flight Illusion setup. It contains the USB port, power supply connection, fuses, and four data connectors. The GSA-55PS is the same unit, but includes a USB cable and power supply.

It turns out that I did not need the “PS” version as the the power port is actually a standard 4-pin hard drive power connector you would find on most PC power supply harnesses. So if you have spare, you can use it to power the standard GSA-55 and save some cash.

The 10-pin data connectors are indexed and the included ribbon cables can only be inserted one way.  Each of these ports can normally support up to 16 gauges each, for a total of 64 gauges, per GSA-55 Central Interface board.

Flight Illusion offers the 737 flaps gauge in both single and dual needle configurations. The real plane uses dual needles and a standalone avionics suite such as ProSim737 can control both needles individually. However, be aware that FSX cannot simulate asymmetrical flaps and most add-on aircraft do not even model individual left/right flaps positions. The single needle gauge is $80 cheaper, so consider this when choosing the single or dual option.

The gauge itself is very close in design to the Boeing counterpart. However, the real thing says “FLAPS”on it, not FLP as on this gauge. And, the needles and lines at each numeric setting are shaped a little differently. Overall, it is a very nice gauge with suitable markings for my cockpit.

The Flight Illusion Chronometer is a replica of the chronometer units used on both sides of the 737 MIP before they became LCD screens on newer aircraft. It has a single needle that counts seconds when the ET is running, and the two 4-position numeric LED displays are clear, bright, and yellow in color.

All of the buttons and functions are operational, including time, date, chronometer, clock, and elapsed time. On the back, there is a 2-pin header that can be connected to the CLOCK momentary switch on your glarewing. Closing the pins causes the action.

The Yaw Damper gauge probably receives the least amount of pilot attention in the entire 737 cockpit. It rarely moves, and when it does, it better not be by much! But, as I wanted to be thorough about upgrading all of the JetMax gauges, this means the Yaw Damper had to be included.

This gauge resets itself every time you power it up, going to full deflection, then back to center. It is pretty quiet and quick about it, so it is not annoying in any way.

GETTING IT ALL TOGETHER

Flight Illusion gauges do not include any kind of mounting hardware or instructions, so you are pretty much on your own here. And, while the gauges all have drilled holes in the corners, they may not line up with the holes in your particular brand of MIP.

After I started removing the existing “gauges” in my JetMax SKTQ, I found the new gauges definitely did not match up. Even if they did match, the holes in the gauges are strange sizes and most don’t go all the way through. So, this severely limits the attachment options.

I searched the Internet for similar encounters, and found most Flight Illusion customers ended up using sticky tape. So, that’s what I ended up doing as well. Using 3M double-sided clear adhesive tape, I cut small triangles and attached them to the face of the gauges. Then, I just lined them up within the MIP and stuck them there. So far, it is holding them extremely well with no issues. The only drawback here is that you are left with open holes where screw heads used to be. Someday, I will cut some screws down, paint them, and glue them in the holes for aesthetics.

Depending on your MIP, you may also have a gap around the gauge edges. In the case of my chronometer, I used black electrical tape to block out the spaces as best I could. I then hooked up the pin header on the back of the gauge to my JetMax glarewing CLOCK button and it worked like a charm!

I then slid over and moved to the Yaw Damper and Flaps gauges. From the factory, my JetMax sported a dummy Yaw Damper and the Flaps gauge used eight LEDs to indicate exact flaps positions. While quite effective, nothing moves on it and, the UP position does not light at all (this is due to an eight LED limit per interface plug JetMax uses, which simplified the wiring harness and lowered cost).

As the Flight Illusion gauges do not come with bezels, I re-used the 3-D printed -plastic bezels used by the JetMax. Here, I cut some cardboard from the shipping package to level out the surface before add the 3M tape. Once they are all mounted, I used the supplied ribbon cables to connect them back to the Central Interface.

Flight Illusion gauges use ID numbers from 0 to 255 to assign the appropriate function to each device. Some come pre-programmed, but others default to 255 and must be changed. You cannot have duplicate gauge IDs on a single Central Interface board.

CAUTION: Never connect or disconnect gauges while the power is switched on. It can damage the components.

Before I could use the gauges, I needed to install the G-STEP Control Program software from the Flight Illusion website. Then, with only one gauge connected at a time, you can assign the needed values. You also select the first function (such as Yaw Damper, Heading, ITT Turbine, etc.), and if the gauge has a second needle, the second function.

You can then test the gauge operation and configure further details such as needle speed and rotation direction. If you have multiple of the same gauge, such as multi-engine instruments, you can assign that specific assignment here as well. When setting up the chronometer, you have the option of using the PC time, or FSX in-game time. The Flight Illusion online manual was last updated in 2005, but is still relevant and quite easy to follow.

NOTE: I use the ProSim737 Avionics Suite which natively supports the Flight Illusion gauges. Simply enable the “Flight Illusion Support” checkbox and select the correct COM port. You may need to assign specific ProSim737 gauge ID values in order for them to work properly. In my case:

Then, you use the Gauges tab in ProSim737 to set the gauge limits and position to match what is expected. This is done with on-screen sliders and markers for each position. All in all, fairly straightforward and only needs to be set up once.

If you use the gauges directly with FSX aircraft, you will also need the popular FSUIPC library. This allows the G-STEP software to run in the background and drive the gauges while reading the values from FSX via FSUIPC.

The G-STEP software has additional options such as aircraft specific (plates) and custom gauge operations if you so choose.

Finally, the lighting. Flight Illusion gauges use cool white LEDs to illuminate the gauges. They are triggered by the light switches within FSX and require the aircraft to have main bus power. However, this is not the correct color, as it should be more amber and warm.

In the case of the Yaw Damper and Flaps gauges, it is not even real backlighting, but sits between the lens and the gauge face. It is not very diffuse, but does a decent job of lighting up the gauge. The chronometer does have backlighting around the bezel, but the face itself is lit the same way as the others.

As the product has performed as advertised, I have not needed to contact Flight Illusion for any support other than asking how they expect people to mount them. They never responded to that email.

There are not many options in the flight simulation market when it comes to gauges. I chose Flight Illusion gauges based on their impressive selection, reputation for quality, and native ProSim737 support.

And true to what I heard, the quality of construction and materials is very good and the gauge operation so far has been flawless. They are smooth, accurate, and do not need recalibration. I love being able to watch the flap needles move between positions instead of waiting for the JetMax LEDs. I use the chronometer on every flight and ignore the Yaw Damper just as I did before, but it does work correctly!

However, I feel there are some glaring design issues. The installation options are very limited due to poor mounting hole layouts. The gauge faces/needles could surely be more accurate. The lighting is sub-par and should be true backlighting. And, I would think getting a more correct lighting color would be as simple as using a different LED?

Overall, I am content with my Flight Illusion gauges. They do what I expect them to do, but a more exacting person may be disappointed. They are quite expensive considering what you get, but the market does not have many other options. In the end, I chose to give the Flight Illusion Gauges a decent 7 out of 10.