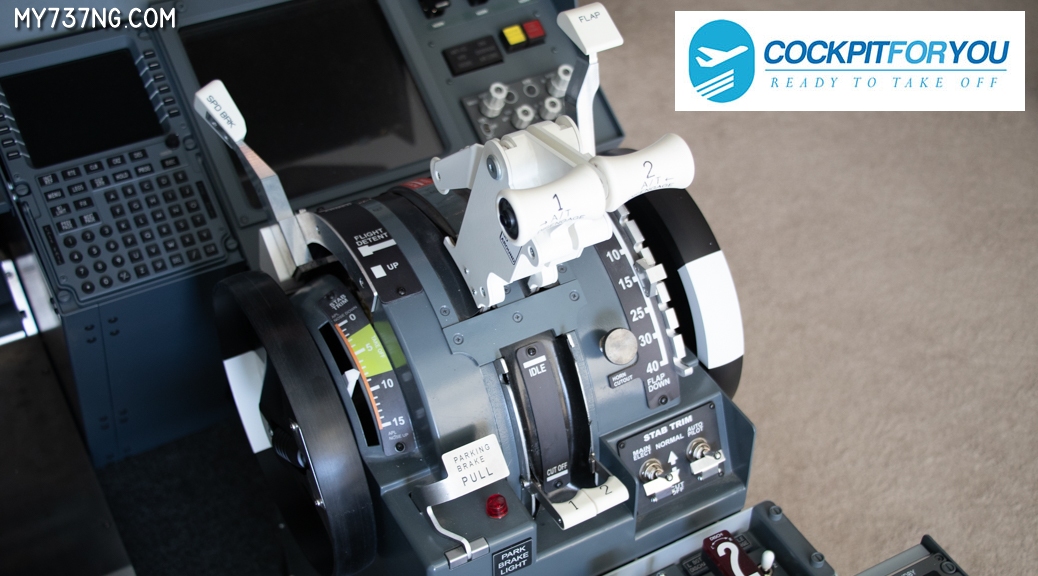 The Cockpit-For-You Motorized Throttle Quadrant v3 Gold Plus is a cockpit hardware device for flight simulation designed to replicate the throttle quadrant (TQ) found in the Boeing 737NG. Cockpit-For-You is based in Berlin, Germany and the product was shipped to the United States.

I have always enjoyed the Throttle Quadrant included with my JetMax SKTQ. It is superb for the price and likely satisfies most simmer’s needs. However, for me, the lack of automatic movement, lighting, and trim wheel/indicator operation really detracts from the realism. After much research and deliberation on replacement throttle quadrants, I decided the Cockpit-For-You (CfY) TQ was the best option. The best available option they sold at the time was the ‘v3 Gold Plus’ version which includes the following features:

Since I sold the sim before I had the chance to purchase this TQ, this article is based on the new owner’s ordering/purchasing experience, but my installation and usage feedback (I visited the new owner to help him install it).

The Cockpit-For-You Motorized Throttle Quadrant v3 Gold Plus was shipped via DHL. It was only supposed to take a week, but it suffered many delays and even disappeared in transit! It finally arrived safely almost a month later.

The TQ comes packed in very heavy cardboard box, bound with straps and marked FRAGILE. There was no visible serious damage to this outer packaging.

Once opened, we saw that the TQ had shifted within the foam packing, but no damage was found. You can see the map pocket on the left.

The TQ itself was also wrapped in plastic.

The drivers are available in the “update” section.

The manuals are available in the “instructions” section.

At the time of this writing, v1.7.20 was the latest driver version. We used the ‘without SimConnect’ version as the SimConnect version is designed for PMDG product compatibility.

The Cockpit-For-You Motorized Throttle Quadrant v3 Gold Plus was completely assembled right out of the box. It is crafted mostly from aluminum and steel (98% according to CfY) and appears extremely well made. This explains why it is so heavy.

The design is very accurate to the real aircraft, from the shape and feel of the components, all the way down to the details such as the metal gates at Flaps 1 and 15. The upper frame is entirely metal and the color appears to be a good match for RAL 7011 “Boeing Grey”.

An important first observation here is that the CfY TQ sits on it’s own square stand. The outgoing JetMax TQ stand has angled panels that meet up with and are bolted to the MIP.

WARNING: The JetMax TQ stand panels serve a VERY important purpose. If you have your overhead panel mounted to the back of the JetMax as I did (using their JetMax-OH1-STD), the TQ stand acts as a large ‘foot’ to keep the JetMax from tipping over on the pilot. The JetMax TQ stand cannot be reused with the new TQ, so it has to come out. So, even though I already had the JetMax secured to the base platform, I drilled out extra holes and added even more mounting screws. Please use extreme caution here and make sure that your solution keeps everything in place!

Once the JetMax MIP floor mounting was reinforced, I disconnected the CPFlight modules in the FlyEngravity pedestal and removed it. Next up was removing the JetMax TQ. It is only held into place with a few screws and hex bolts.

NOTE: The JetMax TQ also acts as the USB joystick interface for the JetMax steering tiller. Since we did not have a joystick controller board to move that potentiometer to, we simply moved the JetMax TQ behind the sim, left the USB cable connected, and deleted all the assignments from ProSim/FSUIPC that the JetMax TQ used except the tiller. The tiller will be moved to its own Leo Bodnar BU0836 interface soon.

It is also worth noting here that the CfY TQ will not simply slide into the same space the JetMax TQ used. Due to the JetMax MIP’s lower EICAS screen sticking out a bit (you can see this above), it would collide with the front angled part of the new TQ. We could have trimmed into the new TQ to make room, but chose not to. Our solution was to put the CfY TQ in place as far forward as possible, and just mount the pedestal up against it. This means the pedestal is now shifted back about an inch, but it is barely noticeable.

This v3 Gold Plus version was supposed to come with latches to attach it to the base, but we found no such pieces in the box, nor attachment points on the stand. But, since it weighs more than 40 pounds, we elected to just leave it sitting in place on its own.

You won’t notice it much from the pilot’s seat, but it is worth mentioning that there is now a gap between the CfY TQ and the JetMax MIP. I thought about trimming the old side panels from the JetMax TQ stand to fill the gap, but they wouldn’t leave much clearance between the trim wheels and the TQ frame, so it was left alone.

Finally, there is no way to run the pedestal’s cables “through” the CfY TQ from the MIP like before (the stand of the JetMax TQ was hollow), so they were run alongside it on the floor. If I had more time, I would probably have drilled holes in the base and run them under the base platform. But, this can be done in the future.

The Cockpit-For-You Motorized Throttle Quadrant v3 Gold Plus has a fuse, a RJ-45 Ethernet port and standard C13 AC plug on the back. Since the internal power supply switches voltages automatically, the power cable you need depends on your country. CfY supplied a Ethernet cable and USA power cable.

Once the TQ is powered and connected to your network, it can be turned on via a small red toggle switch on the forward right side.

After the CfY software is installed and started, it will search the local network for the TQ. Then, it will ask to run a calibration. When the calibration is completed, the software MINIMIZES itself to the Windows Task Bar (it does not crash/close like we first thought). Just click on it in the task bar to get back into it. The application needs to be running for the throttles to work with the simulator.

Then, open the ProSim737 main application, navigate to the Config > Configuration > Drivers tab, and enable the Generic COM port/TCP driver. Select the Advanced button and change the Operation mode to ‘Mixed’ mode.

Next, switch to the Levers tab, scroll down to Speedbrake section, change the Analog input to ‘Generic driver TCP’ and type A_SPEEDBRAKE in the box.

Exit ProSim and restart the PC. The Speedbrake lever detent positions can then be calibrated within ProSim.

NOTE: In order for correct TQ operation, both rudder pedal toe brakes axis (left and right) must be configured and calibrated within FSUIPC.

That was it! The CfY software will now talk to both ProSim and the flight simulation software and run the TQ. The status of these ‘connections’ can be seen in the CfY software screen.  You can also see each axis and button state for testing purposes. Each time you start the CfY software, it will run a quick calibration and minimize itself. Then it is ready for use and I start it before anything else.

Thorsten Müller is the owner of Cockpit-For-You and he directly answers all communications, but had to be prodded a bit. Many emails to CfY went unanswered, which was very frustrating along the way. There was also a bit of a snag with the software (the automatic minimizing noted above), but it was sorted out quickly. I believe he builds all of these TQ himself so he likely is very busy, but for the high price tag, he may want to get more help.

The Cockpit-For-You Motorized Throttle Quadrant v3 Gold Plus is a huge step up from the JetMax TQ. It adds a huge amount of ‘feel’ to the cockpit and allows for more accurate operation. The motorized throttle lever movement is smooth and quiet. They actually move a lot more than I thought using A/T due to the autopilot correcting for winds, VNAV state changes, etc. The trim wheels take some getting used to, but work flawlessly. The sound is very close to the real thing. The wheels have some heft to them, and since the TQ was not bolted down, it does shake a little under heavy trimming but not too much.

The speedbrake lever deploys on touchdown as expected, and stows itself when needed. Having variable thrust reversers is also nice.

The stab trim indicators are a little off from what ProSim is showing, but with the 737, that is not a big issue.

Lastly, I am not sold on the backlighting yet, it is kind of green and stands out with all the halogen orange in the cockpit. But, it is still nice to see it lit up for trim readings, flap settings, etc. In the end, the Cockpit-For-You Motorized Throttle Quadrant v3 Gold Plus is a superb addition to any simulator cockpit. The construction is high quality, very solid, and performs admirably. However, the instructions were not very clear, the attachment latches were missing, there is no way to run wiring through/under it, and the backlighting is odd. For these reasons, I give it a solid 9 out of 10.