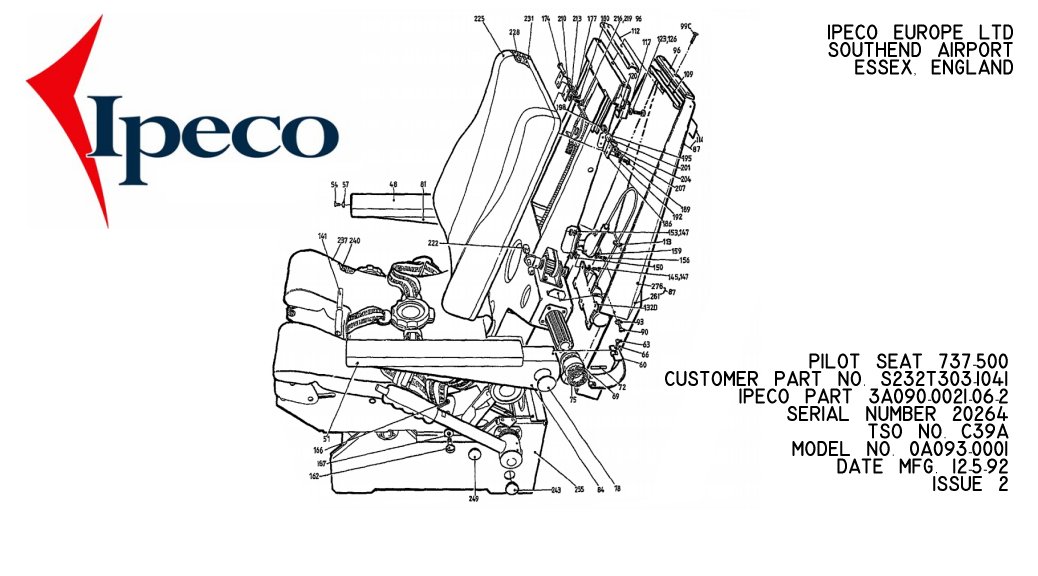 As my home 737 cockpit simulator build has progressed, I had no issues using a rolling home office chair as my pilot seat. After installing my Simujabs Rudder Pedals, that all changed. These pedals require more force than my old Saitek pedals did, so having a chair on wheels was not going to work. I was at constant risk of rolling right off the platform.

So, my timeline for finding a suitable pilot’s seat was rapidly advanced. There are a few places on the Internet that provide decent build-your-own seat plans, but after visiting the Swiss Sim Shop, I took the plunge and purchased a Ipeco 737 Pilot Seat from a real Boeing airplane.

ORDERING / PRICE (in US Dollars, rounded up)

This Ipeco 737 Pilot Seat was purchased locally from Swiss Sim Shop in October 2015 and I brought it home myself.

As I picked this up locally, there was no shipping required. Another sim pilot who lives up in Seattle paid about $280 in shipping from Swiss Sim. Your costs may vary and may seriously influence which seat you buy.

My seat was wrapped up and bagged before I took delivery for protection (there was rain in the area), and it made it home safe and sound. I unwrapped the seat and looked it over. For being built over 23 years ago, it is in remarkably good condition.

The sheepskin is worn in, but not worn out or thinning. The mechanics all work, and there is acceptable wear on the painted surfaces. I may re-cover the armrests down the road.

It included the full 5-point safety harness, grey seat belts, and the life vest pouch on the back.

I checked the Ipeco name plate and did a little research. It is serial number 20264, manufactured on May 12, 1992, and was removed from a 737-5B6. This plane was operated by Royal Air Maroc airlines, registered under CN-RNH, from 1997 to 2013.  I was even able to find plenty of photos of the actual plane online, such as this one:

The plane was then transferred to VX Partners who stored it and registered it as N486VX. The seat was removed on April 25, 2013, ended up at Swiss Sim Shop, and is now in my hands.

There are obviously no drivers required for this seat. However, I did reach out to Ipeco Holdings, Ltd. in Essex, England and obtained the Operations Manual for this model of seat. The line drawings you see in this article are from the manual.

Swiss Sim Shop did give me an 11-page set of instructions with photos for their custom J-Rail installation.

This seat is the J-Rail type, which uses four small bogies under the seat base to roll along four J-shaped tracks. As Swiss Sim Shop did not have any real J-Rails in stock, and they require special precision to mount correctly, I chose to purchase their custom J-Rail system. I am not that exacting to something I will not see often, and so long as it works like the real thing, I am OK with it.

Using the Swiss Sim Shop’s custom J-Rails requires removing the four bogies from the seat base. They are each held in place by a 7/16″ castle nut with a cotter pin as seen here. The aft bolts are not easy to reach and the cotter pins are a pain to get out, but it can be done with enough time.

Then, I went to remove the existing lock pin bracket, leaving the upper pin place. As you can see here, one of the screws was being difficult and ended up becoming stripped. I attempted to cut a slot across the screw head and use a flat head screwdriver, but it just ended up snapping the head off and leaving the bracket attached. I solved this problem using the last resort, a crowbar. Luckily, the bracket quickly popped off and no damage occurred.

The Swiss Sim Shop J-Rail kit includes a thick metal base that has four heavy duty metal casters welded into it. A pair of included L-brackets need to be attached to this base, but they do not provide the bolts. I found some leftover M6x12 bolts that worked perfectly.

They also say to mount these L-brackets one way, but I had to mount them like this to fit the seat and line up the locking pin hole (circled in red). You results may vary.

The L-brackets are then fastened to the seat using sheet metal screws. These screws are also not provided. This does require drilling of the seat base crossmembers.

A supplied pin assembly is then screwed into this base plate which has an arm that rests on the remaining pin of the locking lever under the seat. This is what allows the new base plate to move and lock into place.

Next, I installed the J-Rails onto my platform floor. They come in four pieces, and appear to be confusing, but don’t worry…

…they fit together just like a jigsaw puzzle and align perfectly. I am *really* glad that I decided to extend the base an extra 6″ back when I built it. These rails fit with just an inch or two to spare!

I centered them on either side of the yoke and just back far enough to where the yoke (in the full aft position) barely contacts the seat cushion. I then used 25 screws and washers (not included) to fasten it all down.

Finally, after applying a liberal amount of lubricating grease (supplied with the kit), the seat and new base drop into the rails at the forward end. The locking pin engages the holes in the right rear rail as expected, and we are done!

A real Ipeco 737 Pilot Seat has vastly more adjustments than I originally thought. Here is a quick overview using pictures I took and images from the Ipeco Operations Manual:

On the outboard side, you have the large adjustment lever for vertical seat height, a small lever to recline the seat back, and a large knob to adjust the seat back up and down.

On the inboard side, you have the short tracklock lever to slide/lock the seat horizontally along the J-Rails, a forward knob to adjust the height of the thigh pads, and a larger aft knob to adjust lumbar support. There is also a ball lever on the seat back that operates a inertial reel lock to prevent seat belt movement.

The armrests both slide left and right on a shaft to adjust width, and can fold up and back when not needed. At the full aft position, they can be slid in behind the seat back and out of the way. As the seat back angle can be adjusted, underneath the armrests is a knob that when turned will change the armrest resting angle when down.

The lower seat belts are held in place with straps sewn into the lower seat cushion. They are all adjustable and latch into a central locking hub that is attached to the left lap belt. A simple twist of the hub and all belts are released.

Swiss Sim Shop was very helpful during the purchase of my Ipeco 737 Pilot Seat. They gave me the locking pin for the Flight Officer’s seat at first, but quickly replaced it with the correct one. I also mentioned to them it would have been nice if they included the missing fasteners required to bolt the seat to their custom J-Rail base.

I really wanted to wait on spending so much money on a chair until I had the full cockpit and needed them both. However, now that I have spent some time using it, it has been fantastic. The seat is well used, but functions perfectly and really adds a layer of realism to my cockpit. I love that the thigh supports are spring-loaded to be more comfortable, but wish the bottom cushion was deeper (as I am very tall).

In the end, I am happy that I can use my rudder pedals and yoke correctly, and the high level of adjustment allows all shapes and sizes of pilots to enjoy my simulator. My only issues were the missing hardware and how much these things cost. With such a limited market of buyers, I would expect them not to be held ransom at such a premium. I can still honestly give the Ipeco 737 Pilot Seat a strong 9 out of 10!