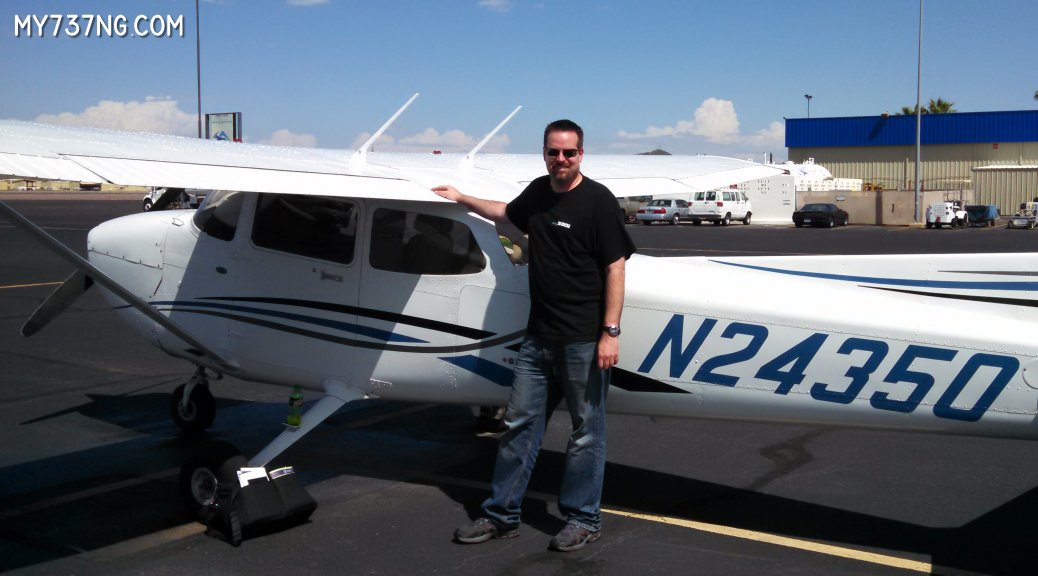 I spend a lot of time looking at flight simulation Internet forums, blogs, and videos. This is both curiosity and  comparison to see what others have done during their cockpit builds. One feedback comment I frequently see “outsiders” ask is “With all the money you spent on this thing, you could be a real pilot.” I thought I would take a few minutes to explain why I chose to build myself a 737 home cockpit instead of getting my Private Pilot License (PPL).

I got back into flight simulation in October 2014. It reignited an inner passion I realized I always had… flight. After a few months with Microsoft FSX and the PMDG 737 NGX, I thought the same as most: Why am I not doing the real thing? My father and step-father were both private pilots and seemed to love it. So, I started using my desktop flight sim to take the Cessna 172 out and fly it around as preparation. I even bought the Saitek Pro Flight Cessna Trim Wheel to help me out.

I then searched for a local flight training school and signed up with Westwind Aviation at Deer Valley Airport (KDVT) in September 2014. I passed my Class 3 Medical and got my Student Pilot Certificate from the FAA. I also had to buy my David-Clark aviation headset, flight bag, kneeboard, charts, GATS jar, and manual flight computer. The costs were starting to add up.

My first flight was September 20, 2014 in a Cessna Skyhawk C172SP. I was so familiar with glass cockpits at this point, I even chose to train with a plane equipped with a Garmin G1000.

My flight instructor, Steven, was a fantastic teacher and loved that I obtained a great amount of knowledge about flying. Due to flying my sim, I already knew about airport markings, NOTAMs, reading METAR/TFRs, flight control basics, airspace usage, radio operations, navigation, and more. He said most new students don’t even know what an altimeter looks like or what it does. I was like a dream student to him.

We did the pre-flight, taxied out, and took off from Runway 07L. Turning north, we practiced climbs, descents, wings level, situation awareness, and trimming the plane. I even instinctively trimmed without knowing it from my trim wheel practice at home.

We spent over an hour in the air, and as we entered the pattern, he took over, landed, and took us back to parking. Steven was impressed and looking forward to our next trip. At this point, I even picked up the Saitek TPM (Throttle, Prop, Mixture) panel to hone my skills even more. I did enjoy the feeling of being up there, but something didn’t seem quite right.

I went on three more training flights with Steven, learning steep turns, stalls, visual reference, S- turns, turns around a point, flying the pattern, slow flight, and normal landings. All while I was the Pilot In Command (PIC). And then, I just stopped flying. My last training flight was in January 2015.

And, to keep current after obtaining my PPL, I should really fly a couple times a month. Ultimately, I felt the costs to obtain and maintain my PPL were just too much to accept.

I am an analytical person. I like learning and practicing procedures, systems, and processes, but I don’t think I caught the “bug” of real flying. I want to do everything right, and I fear doing less than that. And, real flying has a lot of wrongs that can hurt you or worse. Not to mention that I would never get to fly the big complex jets that intrigued me the most.

If I were going after a career as a pilot, it would likely be a different story. But, I am just not young enough to change careers at this point and the pay at most commercial airlines is lower than you might think until you earn some seniority.

So, instead, I decided to dedicate my resources to building a “big jet” of my own at home. I settled on the most commonly successful one out there, the Boeing 737. Cockpit parts can be sourced relatively easily. I can fly it anywhere in the world, any time of day I want, in any weather I want. I can make mistakes and start over. I can trigger failures and save the day. I can fly online or alone. And once it was built, it is incredibly cheap to operate.

So far, I have spent more on my cockpit than I would have on completing my PPL. But, this setup has resale value if I ever grow tired of it. My hours in the C172 do not. It can always provide another simmer with the hours of enjoyment it gives me.

Interestingly enough, Steven called me a few weeks ago to see how I was doing and I told him about the cockpit build. He was shocked and exciting and wants to come fly it himself. My home flight simulator is something I can be proud of, share with friends, and spend time tinkering on. This, to me, is more of the safe, entertaining hobby I was looking for. And that, my friends, is why I built the simulator.

Thank you all for visiting!