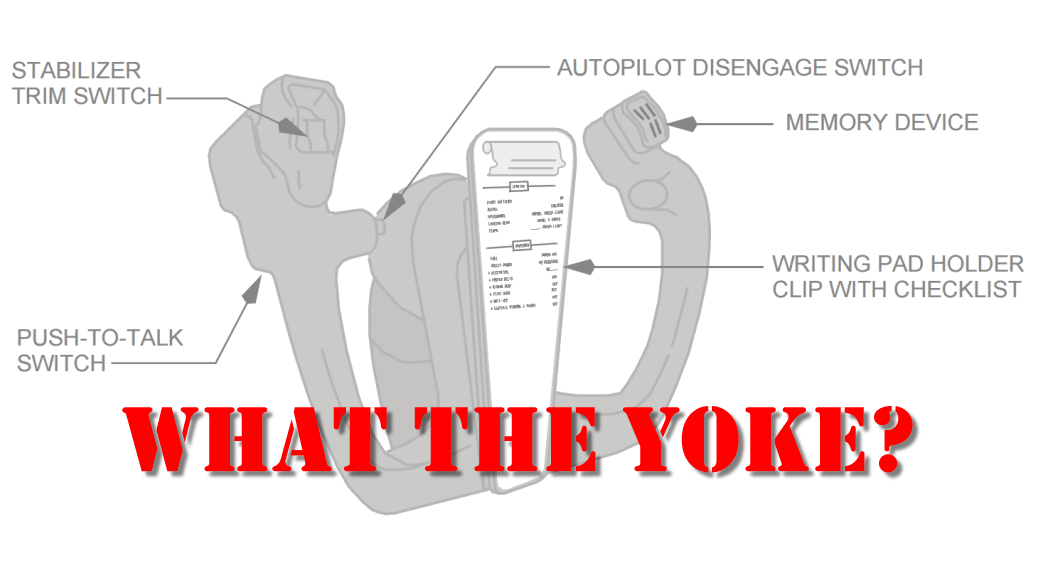 Based on the positive responses I received about my Overhead Overload article, I thought that I may be able to share some information I gathered about the different replica control column yokes available out there for your Boeing 737 home cockpit simulator.

I am expressly talking about the pre-made replica products, not about obtaining real 737 yokes and control columns and converting them. That is a whole different topic and one that only a few cockpit builders will tackle. I wanted to simply focus on pay & play here.

My intention was to find a suitable USB plug-and-play replacement for my generic Saitek Pro Flight Yoke System and the bulky mount that attached it to my JetMax SKTQ MIP. As I don’t have the Flight Officer side of the cockpit, I also needed something that was single 737 yoke and mounted above the floor. I was able to uncover four companies that created such a product: Agronn, Precision Flight Controls (PFC), Aircraft Controls Engineering (ACE), and Simujabs.

I began digging into details on each of them, including emailing the companies for additional information. Then, I put all of the information together in the nice table below.

NOTE: Please understand that the following information is solely intended to document my own findings and in no way should be a declaration that any yoke product is any “better” than any other. Product offerings can and will change. It is always wise to weigh your budget, skill set, and current configuration, and then find a solution that suits your own needs. In short, do your homework!

As you can see, there is quite a wide variety of prices and features in the replica 737 yoke market and another example of “you get what you pay for” in the cockpit building world.

Agronn Simulation Technologies was created in 2008 and, as far as I can tell, is a fairly new to flight simulation products. I was unable to find any private reviews or other specific details about Agronn on the popular flight simulation forums or the Internet. However, from my research, they use very high-quality materials (including some real parts) and pay attention to even the smallest details. These details include items such as the 7° forward neutral position and laser-engraved lettering. This makes the Agronn Yoke Single look exceptionally realistic, but also explains the highest price tag.

Precision Flight Controls (PFC) has been making flight controls, consoles, and other simulator cockpit parts for more than two decades. I’ve read endless online customer praise for their top quality and support. The PFC Jetliner Column Yoke Boeing 737 also offers extra, albeit unrealistic, push buttons you can program. My biggest personal issue with the PFC 737 Jetliner Yoke is the square column and limited yoke rotation. For as much as this yoke costs, it feels as if they could have been more realistic.

Aircraft Controls Engineering (ACE) has been in business since 2008 and I’ve read from a vast amount of customers that they make a very good product. They appear very well built and sturdy, but I noticed they lack a few features the others have, such as a split trim switch and guard. The thing I found most often about ACE is that they have terrible customer service. Other simmers have suffered months/years of unexpected waiting for product and they don’t answer emails very often. This took ACE right off the list for me.

Simujabs is relatively new in the market, only existing since 2013. It appears to be owned and operated by a single person on the island of Mallorca. He has an extensive background in flight simulation and engineering and, from what I can see, the mechanical prowess of their products are spectacular. The Simujabs B737 Single Yoke Control Column unit rotates the full 180° which seems rare in the replica yoke market, but lacks the clipboard, labels/lettering, and is the only yoke made out of painted fiberglass resin. However, the big win with Simujabs is the price. Being hundreds of dollars less than any competitor, it is a great option for those on tighter budgets.

There is no right answer here. Some people will want the most realistic replica 737 yoke in their cockpit and pay the extra premium to own something like the Agronn yoke. Others may not care as much about aesthetics and would be happy with the long-lasting PFC yoke. And, for the budget-minded, maybe the missing features are worth the savings to get the Simujabs yoke. It all depends on you, your build, and your budget. In any case, I can’t imagine anyone would want to deal with reportedly terrible customer service by choosing an ACE yoke.

It is worth nothing that none of these yokes incorporate any kind of active force feedback. For a while, a company called Iris Dynamics was building an “airliner” style yoke that had full active force feedback. But, after their Kickstarter was funded, they suffered from constant delays, price hikes, management issues, and repeated failures at keeping customers/investors informed. Now, they don’t even sell them anymore and the people I found who did have them had problems with operation and quality.

NOTE: If you are looking for dual replica yokes that are linked under the cockpit floor, the only current options are ACE and Simujabs. The Agronn website says they will be offering dual linked yokes soon as well.

Again, I know some simmers will want the real thing and that is very commendable to obtain them and convert them. However, in my case, I wanted an reasonably accurate single replica yoke and I didn’t want to pay the crazy prices. This resulted in my decision to go with Simujabs. You can read all about it over at my Simujabs B737 Single Yoke Control Column review article.

2 thoughts on “What the Yoke?”