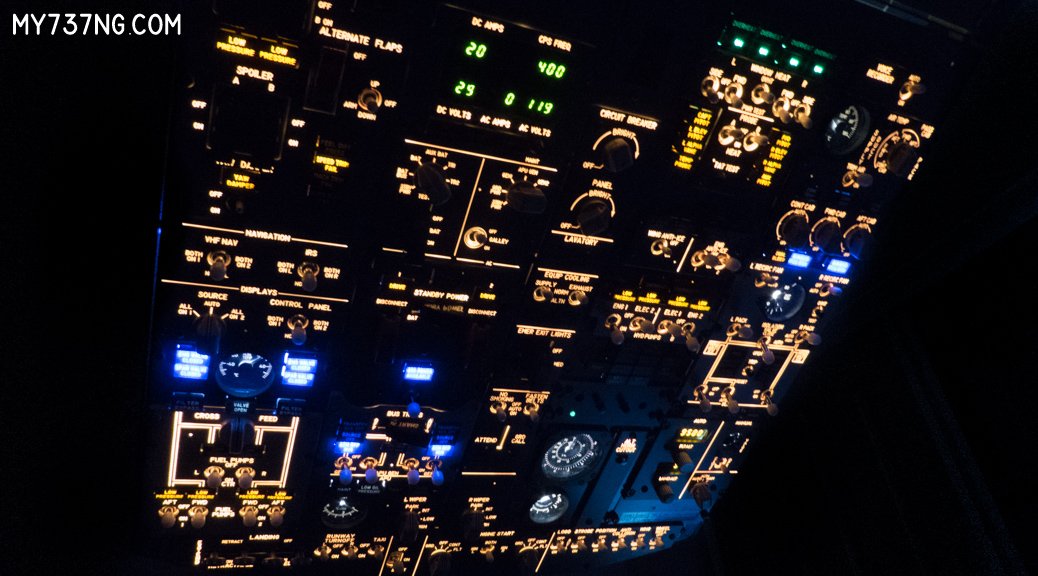 I am very satisfied with my CPFlight products, especially the Forward Overhead Panel. However, there has been one thing that has bugged me a bit: the backlighting color is wrong. CPFlight uses white LEDs which are inaccurate to the look of the actual aircraft panel.

The real Boeing 737 uses tiny incandescent light backlighting bulbs, which cast a much more amber-orange glow than CPFlight’s cool white LEDs. And, these LEDs definitely don’t match the FDS backlighting color of my JetMax SKTQ main instrument panel (which uses actual aircraft bulbs). This article describes how I found out that it can be corrected and how I did it.

This genesis of this “project” occurred after I had issues with the fourth column sub-panel in the overhead. This panel was randomly flashing annunciators and reporting the wrong switch positions. It was even affecting the operation of the connected AFT sub-panel. Eventually, CPFlight sent me a brand new replacement sub-panel.

I installed the replacement sub-panel and it seemed to work well, but the backlighting in the section for the Window Heat refused to light up.

After speaking with CPFlight support about it, they recommended I check the backlighting connections. This sounded easy enough, so I removed the three front screws from the affected faceplate and popped it off. And that is when I discovered that the circuit board holding the SMD LEDs (Surface Mounted Device Light Emitting Diodes) is a separate piece behind the 5mm acrylic faceplate. This was great news for my project idea!

Each LED backlighting circuit board has two pins on the back that fit into a socket on the rear main circuit board. It simply slides out of the socket and away from the panel.

I looked over the LED board and did not see anything wrong. I even swapped in the old one with the same result. But, when I examined where the pin socket on the main rear board was, I discovered a “cold solder”. This is where the soldering is incomplete/missing and the gap prohibits the electrical connection.

After breaking out my soldering iron, I was able to quickly re-solder the connection. I re-installed the board and faceplate and we were back in business!

Now, it was time to devise a plan on the backlighting color fix. I thought back to my high school days as the Lighting Director in our theater department. When we needed to change the color of a stage lamp, we used a color filter or gel in front of the bulb. The color gels, in particular, are usually very thin, inexpensive, temperature-resistant sheets of colored polycarbonate or polyester, and are widely available.

In my case, I wanted to change the color “temperature” of the white LEDs, from  over 6000K (Kelvin color scale), to more of a tungsten-like 3200K. I had read that changing white LED to tungsten may need a Full or even Double CTO (Color Temperature Orange) gel. I bought a sample pack of LEE Filter correction gels in various CTO levels from Amazon and began trying them out.

I started with the Full CTO  (LEE Filter #204) and used a marking a pen to stencil the shape of the backlighting circuit board right on the gel.

I then used a very sharp craft knife to cut out the shape. It took a bit of time to carefully trim the piece, but I eventually got it to fit perfectly into the faceplate cavity.

I then trimmed out the switch holes and tested it. I put the faceplate back together, re-attached it to the overhead panel, and turned it on. What I found out was that my plan might just work.

However, I felt the Full CTO gel was way too orange. The photo above is a bit deceiving, as the camera’s auto white-balance corrected out how orange it really was to the human eye.

I went back to the gel pack and tried a Half CTO (LEE Filter #205). After testing it, I thought this gel to be a bit too “cream” in color. Finally, I tried the 3/4 CTO (LEE Filter #285) and found it was an near perfect match to the backlighting in the JetMax! Color is subjective to each viewer, so if you try this, play around with different gel colors until you get the one you like.

Even though I found the backlighting color to suit my tastes, I had a new problem. The faceplate didn’t sit flush against the panel anymore, allowing some backlight to leak out the edges. This was because the backlight circuit board is meant to completely fill the faceplate cavity I just added the thin color gel into. I decided to make a little extra space for the circuit board components in the gel to help overcome this.

I found a suitable solution with a tool normally used in pottery work: a metal ball head pottery stylus. I used a circular motion to press the gel down into the faceplate holes for each LED to create little dimples. You do have to press fairly hard, as these color gels are not really designed to be “molded”. I also cut out the tiny squares where the pin connection and other surface-mounted bits would touch.

After the “dimpling”, I carefully pressed the LED circuit board down into the faceplate, paying attention to each LED location.

This pressed the LEDs into the dimples and allowed the board to sit almost perfectly flush! I then went and repeated the same process to change the backlighting color of the entire FWD Overhead Panel.

I am extremely happy with the results and plan on continuing this process with my other CPFlight components.

TIP: For the overhead panels with knobs, I used a 2mm hex wrench to loosen the one or two set screws in each. Then, the knob simply slides off. Make sure you know what position the knob was in before you remove them as the knobs do not have usable indexes.

I do wonder why CPFlight didn’t already do something similar to create a more accurate backlighting color in such expensive products. From gels to amber/orange acrylic faceplates to tungsten-colored LEDs, there would seem to be many options to do the same job. Perhaps they will consider it for the future.

Either way, I hope this was helpful and informative and thanks again for visiting!

NOTE: I will add on to this article when I complete the AFT Overhead Panel, MCP 737 Pro, EFIS 737 Pro, and Complete Pedestal.