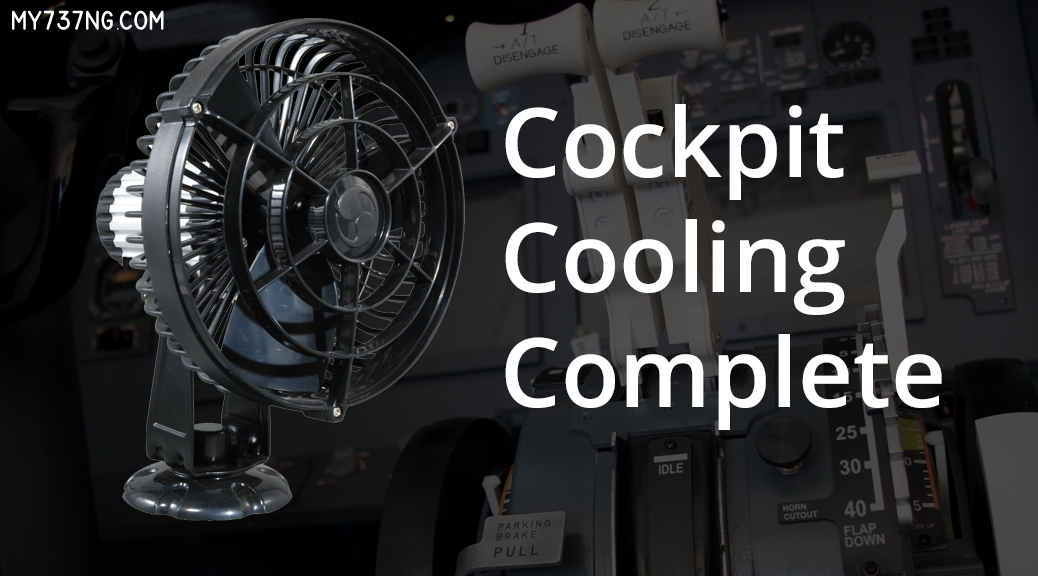 My 737 cockpit simulator is not in a very big room. The window faces west and gets blasted by the afternoon sun. Then, when I add in all of the computers, monitors, lights, and hardware for the cockpit, it can get quite warm in there. I always wanted a small fan or something I could use when needed. And, why not control them with the sim itself? This article is about how I accomplished that.

NOTE: Please turn off and unplug your simulator before starting. Even though the voltages here are low, don’t take the risk!

The fan I used is a black 12V Kona model 817 designed for marine applications. It has a suction-cup base for easy mounting, 3-speeds, and uses very low power. They are not cheap, but are very durable.

The fan comes with a standard lighter plug on the ends of the power line which I can’t use, so I cut that off.

Since this fan runs on DC power, I needed to know which wire was positive/negative. Otherwise, the fan would turn backwards. I used a voltmeter to check continuity on the leftover lighter plug and found the ribbed side of the fan’s wire was positive (left side wire in image above). This would be the wire I am going to connect to the relay.

The relay interface I chose was a Phidgets 0/0/4 relay card. They are well known in the simmer community so I felt comfortable using them. I also know that ProSim737 has native support for Phidgets hardware, so that made this an easy decision.

The 0/0/4 card has 4 independent relays capable of 210W DC power switching and is connected via an included USB cable. This is more than enough to support even four of these fans.

I didn’t want this board loosely moving around behind the JetMax, and it comes with plastic standoffs and bolts. So, I found a location behind the upper EICAS monitor and mounted the card in place.

Next, I needed power. I looked behind the JetMax power supply and located the hard drive power plug I used to power the Integrated Back Lighting. I had already cut off the red/black +5V wires for the IBL, but still had the yellow/black +12V side available. This would power my fan.

I cut the plug off and connected the negative (smooth) wire from the fan to the black wire with a butt connector and electrical taped it. This gives me the 12V ground. Next, I ran the yellow wire up to my relay card and connected it to the 0C center terminal of the first relay. This would be my +12V common power source.

I ran the positive (ribbed) wire from the fan to the relay card’s NO (normally open) terminal on the first relay and screwed everything in place. Once the USB cable is connected, that takes care of the power wiring.

It was decided that the fan would sit on the FO’s side of the glareshield and aimed at the pilot. The suction cup worked great for this. There is enough wire on the fan to move it to other locations as needed.

I plugged the USB cable into my USB hub, and powered everything up. The only step left was to enable Phidgets support in ProSim737, let it restart, then decide how I wanted to trigger the fan’s operation.

I originally thought it would be fun to have it triggered by Pack L or Pack R operating gates in ProSim, but they have some logic to when they are on or off. So, I tried the gate for the Recirc Fan R. But it also has logic to when it runs. In the end, I chose the gate for the Dome Light switch on the aft overhead panel. I configured it to trigger  the PhidgetsRelay 0 and it worked like a charm!

Now, when the temperature goes up, I can control my new fan using the overhead panel switch. It makes a surprising difference to have a little airflow in the cockpit on those summer days!