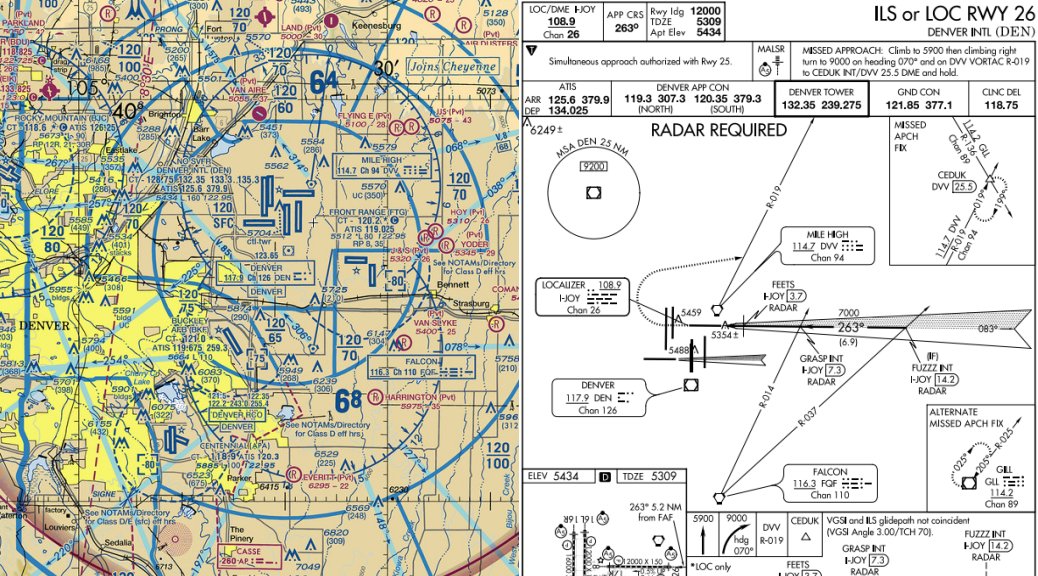 As a pilot, whether flying on visuals or instruments, you should always have your charts with you. Aeronautical charts are the maps of the skies and an invaluable source of critical information. When I was training for my Private Pilot’s License, I had my Visual Flight Rules (VFR) and Instrument Flight Rules (IFR) charts handy at all times.

When flying our simulators, these charts are usually just as important. From navigating VFR using just radios and landmarks to full IFR routes with GPS and IRS, there are many options for us to choose from. I wrote this article to cover a few of the most common choices and some of the notable differences.

NOTE: If you are looking for information on updating your Flight Management System (FMS) data such as found within ProSim737, PMDG, Aerosoft, etc. or various flight planning products, you should check out my Navigraph Manager article.

If you fly VFR, by far the best place I found for charts is the SkyVector website. While concentrated on the US, they provide an intuitive web-based interface covering the entire globe. It includes World Aeronautical Charts (WAC), World Hi-Lo routes, Enroute Hi-Lo routes, and sectional, terminal, and area charts for most major airports.

They even have airport information, diagrams, frequencies, flight planning, weather data, fuel prices, temporary flight restrictions (TFR), and more. It is simply phenomenal and, thankfully, the world’s VFR charts basically all use the same terminology and icons.

VFR charts are constantly being updated. For example, in the US, they are updated every 1-12 months, depending on the complexity and rate of change in the area. Other countries likely do the same. VFR is clean and consistent, but IFR is a whole different story.

Flying IFR in our simulators can be especially daunting. It is an environment that can quickly get complex with airliner FMS, advanced flight planning software, and live online ATC services that can issue published departure and arrival procedures.

The source of charts for IFR in each country is typically that country’s government. These entities create Aeronautical Information Publications (AIP). AIP are defined by the International Civil Aviation Organization (ICAO) as:

“A publication issued by or with the authority of a State and containing aeronautical information of a lasting character essential to air navigation.”

There are thirteen AIRAC cycles each calendar year and they are referred to by the last two digits of the year and the cycle number. So, for example, the fourth cycle of 2015 would be designated as 1504. As of this writing (January 2016), the current AIRAC cycle is 1601.

There are many places to get IFR charts for use in flight simulation. But which one should you use? You could search for various charts online, use an existing list such as from Wikipedia  or VATSIM, or buy them direct from the AIP provider. The problem here is that you manually need to dig up charts from each country you want to fly in.

For example, in the United Kingdom, the AIP comes from the Civil Aviation Authority (CAA). The UK is a member of ICAO and follows their design layout recommendations. So, for example, the ILS-DME Instrument Approach Chart (IAC) for London/Heathrow Airport (EGLL) runway 09L looks like this:

However, here in the US, the AIP comes from the FAA’s National Aeronautical Charting Office (NACO). So, for the ILS approach for Denver International Airport (KDEN) runway 26, the NACO chart looks like this:

NACO charts like this one typically include a small airport diagram with runway layout, approach lighting, PAPI/VASI, and other information. This is seldom found on other AIP charts.

As you can see, similar data is presented in a very different way depending on the provider. Each AIP follows their own guidelines and layout. This can get very confusing when you fly internationally.

The alternative I’ve found is to use a chart provider that covers the entire planet. The big ones that come to mind are Jeppesen and Lido. Their charts are consistent across the entire product, however, again each of them present the information in their own way.

Jeppesen is a subsidiary of The Boeing Company and is based in the United States. Jeppesen charts, or “Jepps”, are used around the world by real world pilots and are the de facto charts in use today.

Jeppesen offers their charts in electronic and paper format, but they are based on geographical global region and are very expensive. Just the lower 48-states of the US in electronic format is $300/year. Luckily, we are only focusing on the electronic versions as the paper version of the US is almost $1500 and comes in fourteen separate 2″ binders. That is a LOT of paper!

Let’s keep using the KDEN runway 26 ILS approach and take a look a the Jeppesen IAP chart. I sourced this from my free 30-day trial with Jeppesen’s Mobile FliteDeck subscription.

Notice the unique trademarked Briefing Strip along the top. This is to provide the pilot with fast access to the necessary approach brief information. They indicate the Minimum Safe Altitude with a circle and include the Initial Fix (IF) point in the descent profile as well. Now, let’s check out the Lido charts to see another way of doing it.

Lido is a subsidiary of Lufthansa Systems AG and is based in Germany. Many carriers use the Lido charts, and more and more are switching to them everyday.

Lido also offers their charts in electronic and paper format, but since they base their pricing on the airports you need, I cannot effectively say how it compares to Jeppesen. I sourced this chart using my Charts Cloud subscription from Navigraph which costs about $60/year. It covers all of the charts for over 2,000 airports and hundreds of enroute charts around the world. Charts Cloud is updated at least 4 times per year, each time expanding in scope.

TIP: You can see the current Navigraph chart coverage by using their online interactive map.

The Lido charts are in full color and includes some VFR features such as range rings and the MSA as an offset number, unlike the Jeppesens. They also limit the radio frequencies to the ones applicable to this particular approach.

Lido charts also offer basic runway information and a distance to DME altitude chart. However, while most charts include minima for all classes of aircraft, Lido omits Class A and B data you may require.

To wrap it up, you can see how widely chart presentations can vary. Depending on the AIP provider, it can be a zoo trying to decipher each country’s charts and find the information you need when you need it. I would rather focus on an all-in-one solution.

Generally, I choose to use the Lido charts by Navigraph. The cost is right, the colorful charts are beautiful and easy to use, and I can use them from my phone, iPad, or PC. From the PC desktop application, I can even print them out if I need to.

When flying inside the US, I still try to use the real FAA/NACO charts readily available from FlightAware. This is to keep me sharp on the format I use when I go flying for real.

Ultimately, it is up to you. As long as you understand the charts and how to use them, pick what you enjoy most. I hope this was helpful in some way and thanks for stopping by!

SkyVector VFR imagery by SkyVector.com. EGLL Chart imagery by the NATS Aeronautical Information Service. Jeppesen imagery by Jeppesen Sanderson, Inc. Navigraph imagery by Navigraph/Lido. my737NG.com is not affiliated with, maintained, authorized, endorsed, or sponsored by any of these companies.

3 thoughts on “Choosing Your Charts”