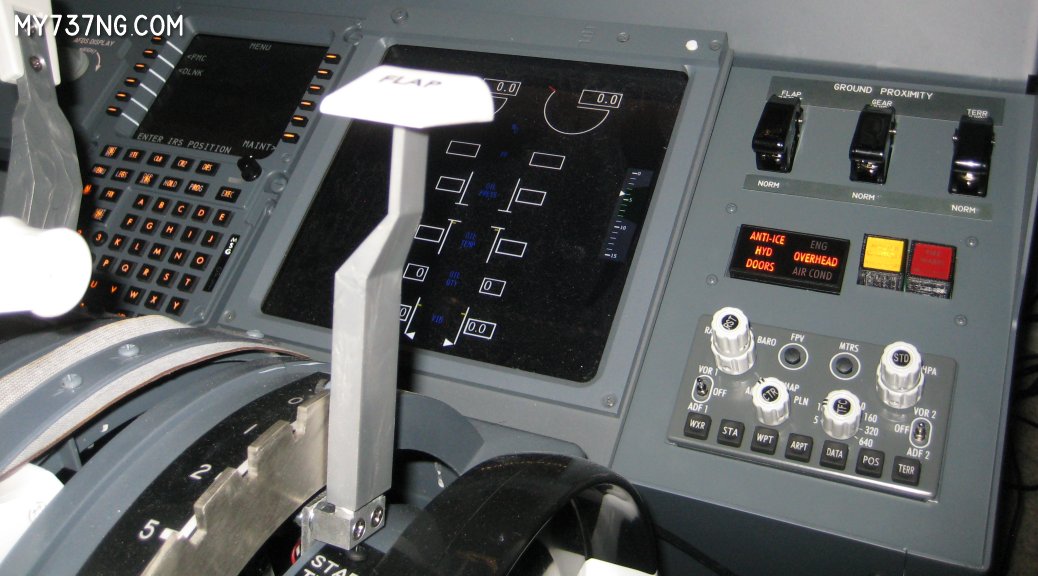 The decision to build a single-seat simulator was ultimately dictated by my budget and limited space. But, that doesn’t mean I can’t have a First Officer position in my cockpit that I can quickly set up when I am not flying solo. While I was waiting for the JetMax SKTQ to arrive, I realized I could substitute most of the missing third of the MIP without taking up a ton of extra room. All I needed was some crafty thinking.

Creating the First Officer (FO) displays proved to be a quick and easy solution. I simply set my 17″ laptop on a small stand next to the cockpit, installed the ProSimDisplay module, and connected it to my ProSim737 Avionics Suite over my home network. Done!

Once I finished my JetMax assembly, I discovered I had a perfect place to build a First Officer’s control panel. The spare CDU bay normally just contains painted acrylic spacer blanks to fill up the 150x230mm space. This is where my new creation will live.

I chose to skip the FO’s chronometer and the associated CLOCK button, but wanted the glarewing’s sixpack and MASTER CAUTION/FIRE WARN buttons and my other CPFlight EFIS Pro panel. Since I did not have my CPFlight Aft Overhead Panel at the time, I also included three toggle switches for IRS OFF/NAV, Passenger Oxygen, and Voice Recorder into the design.

I ordered the three SPST toggle switches with safety guards from Amazon for about $4 each. The Passenger Oxygen switch was ordered in red.

JetMax/FDS was able to supply me with the the FO side glarewing sixpack and MASTER CAUTION/FIRE WARN buttons. They included the connectors with wiring pigtails as well.

Thankfully, the last page of the CPFlight EFIS manual contains detailed panel cutout dimensions, so I just measured the rest with my handy caliper. After an hour or so in SketchUp, I came up with this panel design.

I sent the panel design off to my local laser/waterjet cutting company and, within two days, they created the panel from a 1.5mm aluminium sheet. They even added the small tabs to keep the toggle switches from rotating. I love these guys!

Since the JetMax buttons are designed to be mounted from behind the glarewing assembly, I had to use SketchUp again to create a backing spacer using measurements from my existing JetMax glarewing.

I sent the file to a friend, who easily 3D-printed it. I constantly marvel at the convenience of 3D-printers and should really get one of my own. We actually printed 3 of these of varying heights, and I settled on the 19mm tall version.

The buttons were then aligned in place, holes marked and drilled, then screwed into the spacer from behind.

Next, it was time to see if all of these pieces  fit together…

After I confirmed everything fit, I took it all apart and gave the panel a coat of Krylon Tough Coat 00344 Green Corrosion Inhibiting Primer.

I have a local paint shop that can make the exact RAL7011 Iron Grey or “Boeing Grey” color. They popped it into an aerosol spray can and I gave the panel a few coats.

Just for future information, RAL7011 is equivalent to:

By this time, I had received and installed my CPFlight Aft Overhead Panel.  So, during reassembly of this panel, I swapped the red switch guard with a black one to now use them as GPWS INHIBIT switches from the missing lower right MIP knee panel. I had some labels printed and applied them to the panel too.

From Amazon, I bought two Swellder DB25-M2 female breakout boards and a 6ft (1.8m) DB25 male/male cable to connect them together. Since JetMax/FDS supplied pre-wired connectors with the glarewing bits, this made wiring my First Officer panel to the breakout box painless.

On the other end, I discovered that the JetMax does not use all of the LED outputs on the FDS-SYS3X InterfaceIT interface board. Eight outputs still remained available, perfect!

I picked up some 10-pin 2.54mm (.10 inch) header connectors with leads already attached from All Electronics (search for part #CON-2410). These made connecting the second breakout board to the spare FDS-SYS3X header pins even easier. Unfortunately, the SYS3X board did not have enough spare switch inputs, so I ran all the switch wiring down to extra inputs on the existing SimIO interface card inside my Simujabs Rudder Pedals. Pretty simple workaround and saves from adding yet another USB plug.

This is the final product before it goes back into the JetMax CDU bay. I feel it turned out great!

Finally, I set the panel into place in the spare JetMax CDU bay, connected the wiring, and configured all of the lights/switch assignments in ProSim737. A nice color match and everything works like a charm!

Here is a shot of the whole First Officer position setup.

I realize I don’t have the FO-side annunciators (SPEEDBRAKES EXTENDED, BELOW G/S, TAKEOFF CONFIG, CABIN ALTITUDE) or the other AFDS/ASA panel. However, these features were mostly redundant for the First Officer’s position.

In conclusion, the whole panel cost me about $200 USD and allows my Flight Officer to actually interact a little more during flights. I may even install my recently retired Saitek Pro Flight Yoke System and Saitek Pro Flight Rudder Pedals on that side to let them fly from the right side as well. I am very happy with the result and especially enjoy having both sixpacks operational when flying alone.

Thanks for reading and comments are always welcome!