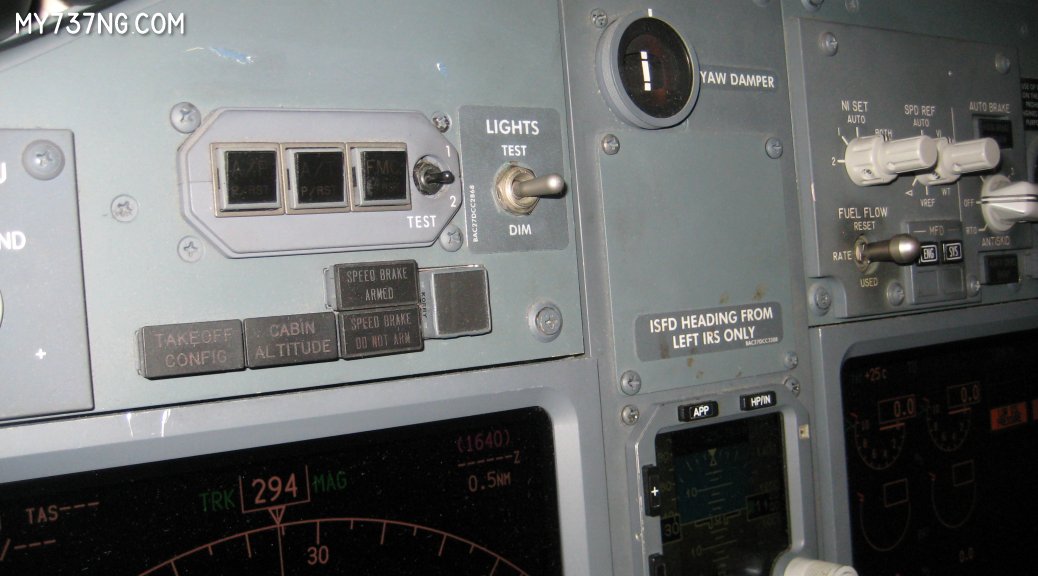 Upon returning from my recent trip to Seattle, I was lucky enough to spend a few minutes inside a real 737 cockpit. The Captain of our Boeing 737-700 graciously allowed me to have a seat and take a few pictures of the flight deck after the plane had deboarded.

I quickly snapped photos and looked around to get a feel for the size, layout, and overall feel of the real deal. The first thing you notice is how small the cockpit really is when fully enclosed. I’m 6’8″ (203cm) tall and I can see how easily cramped a pilot could get on a long haul. I even had to drop the seat as I was bumping my head on the HUG housing.

I realized that the real MIP has a lot more screws in it than you see in simulation products. Also, the Display Units (DU) have a matte finish, not gloss. They are extremely sharp and easy to read, but did not photograph well with the flash. Someday, when I have the space, I will probably replace my JetMax SKTQ with a full FDS MIP.

The real Collins MCP uses backlit LCD alphanumeric displays instead of the LED displays you see on simulation replicas, such as my CPFlight MCP Pro. And while most aftermarket MCPs are close enough for the majority of us, only SimWorld comes with the guards near the F/D switches and V/S wheel, and has the round buttons in depressions. Operationally, it doesn’t make much difference, but for the purists it might.

Most of the EFIS panels you can find for simulators are very realistic and work great, like my CPFlight EFIS Pro. However, the buttons in the centers of the encoders should not rotate. In the real plane, they are always level. This is rare in the cockpit building marketplace, but again, SimWorld does include this feature.

Next, I grabbed a quick shot out of the front window to get a feel for the true viewing angle and visibility. I know they feel small, but the Captain assured me he actually has a great view around the plane in flight.

I also took a couple of photos of the floor near the yoke. I wanted to see how/where the pedals and yoke relate to the MIP/CDU bay for my Simujabs Yoke and Simujabs Rudder Pedals installation. Notice the coil-bound QRH sitting in the pocket?

Fortunately, the cockpit simulator manufacturers can now offer an exact replica of the 737 throttle quadrant, even motorized. I did not see anything here that has not been replicated other than a push-to-test parking brake light.

The same goes for the pedestal. Many simulation companies provide modules and kits for the avionics here. For example, other than the Heads-Up Guidance (HUG) control panel, my CPFlight Complete Pedestal has all of these functions covered.

I also took a couple of shots of the real 737 cockpit interior panels just for additional reference. This is the Captain’s stuff here, so I don’t feel so bad about having clutter sitting around the cockpit when I fly my own 737 sim.

Lastly, we get to the overhead panels. This is a -700 aircraft, so there a few differences to the NG we are used to. Can you spot them?

I did ask about why the Hydraulic B electric pump was on while at the gate with Anti-Collision lights off. The Captain said it keeps the control surfaces centered so the gusty winds outside wouldn’t cause them to suddenly move which bangs the yoke into his knees. Now that is something I would have never considered as a home pilot!

Finally, I want to extend a huge Thank You to Southwest Airlines, Captain David, and the entire cabin crew for giving me this special moment. While it was very brief, I cherished every second of it and I hope I did not get in the way too much. I could have stayed in there for an hour, but I still felt the Southwest LUV that day!

I hope this quick post was beneficial to my readers. It feels like every little bit of information helps all of us in our adventures.