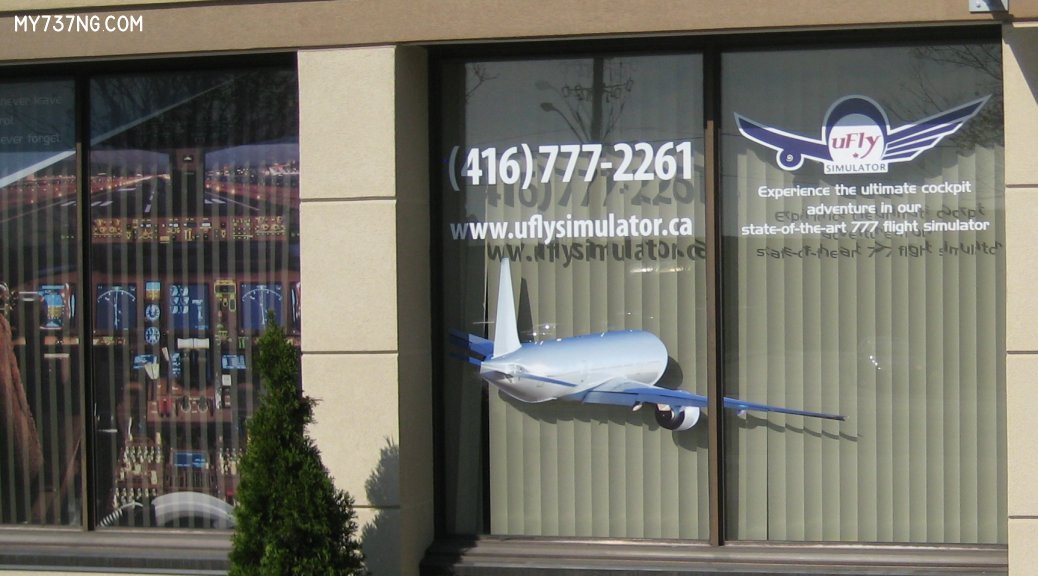 Peter Cos, owner of FDS, recommended I also make a pit stop at uFly Simulator to see their 777 full cockpit sim that was built by FDS. This post is about my uFly experience.

uFly Simulations is located very close to the Pearson Toronto International Airport. If you ever saw the 777 cockpit used by CNN during the MH370 tragedy, you were watching the uFly simulator in action.

Prior to my visit, I had exchanged a few emails with the owner of uFly, Claudio Teixeira, and set up an appointment. Since I did not want to interrupt their daily business too greatly, I mentioned that I did not need to fly the simulator. I just wanted to examine it for the details, quality, and durability of an FDS product from a customer standpoint.

When I arrived, Claudio was unfortunately not available. However, I was quickly greeted by a lobby member, Ana, who already knew I would be coming. Ana was extremely friendly and informed me that a 777 pilot was currently in the simulator and running a bit long. I didn’t mind waiting at all, and we had a great conversation about flight simulation, uFly’s history, and their desire to acquire additional simulators such as another Boeing and an Airbus.

When the simulator was freed up, I was introduced to Luigi. He is one of the uFly instructors who explains the simulator and acts as FO if desired. We stepped through the door into the back area. I was greeted by an amazing custom raised platform with a bit of fuselage tacked on behind the cockpit. This extra piece was not FDS work, but was beautiful in design, even including a curved swinging entry door.

I explained to Luigi my intentions of getting an impression of the simulator build and setup, so I asked to look behind it first. He gladly walked me around the nose of the cockpit and showed me the massive twin PC towers, and a crazy amount of cabling, USB hubs, and more.

uFly utilizes a triple projector setup to display over 200 degrees field of view on a large curved screen. I did notice they block off a bit of the lower rear cockpit windows as the images projected beyond are not visible due to the cockpit shell.  uFly built their own projector mounting/cooling system and used some cardboard to block extra light from bleeding through the overhead panels.

Once inside the cockpit itself, the view out the windows is fantastic! The bleed/overlap between projectors is minimal and the wide field of vision really makes a difference. If you lean forward, you can see the top and bottoms of the screens, but from the Captain’s seat, the view fills every window.

Sitting in the seat and looking around a full-size cockpit was such a thrill for me. Even though my intention is to build a 737NG, the impressiveness of being surrounded on all sides by a 777 flight deck cannot be understated. It was such a magical treat.

As to not waste their valuable time, I kept Luigi busy with an endless list of questions, such as where do the weak and wear spots develop, time frames to get new parts and replacements, and overall operation. uFly has experienced some loose knobs/rotaries, broken switches/levers, and some failed LEDs. Some have been resolved by FDS, some have not, as of this writing.  I know that the uFly simulator gets its share of abuse from overzealous customers and it must be said this is not a multi-million dollar aircraft. It is still an elaborate, yet expensive, cockpit simulator. It will get a fair amount of expected failures.

As for the FDS quality and construction I experienced, it appeared top notch. From the subtle green 777 backlighting to the shape and feel of the controls, buttons, and panels, everything just feels right. I enjoyed understanding the relationship of the yoke to the MIP and the clarity of the ND/PFD displays (I have always wondered how easy they would be to read from the seat). uFly uses Buttkickers under the seats and a full surround sound system to add to the immersion. Overall, I was more than impressed with the cockpit and how uFly built it in, including the rear instructor/viewing area.

I do want to say that Luigi was incredibly knowledgeable about the 777 cockpit and its operation. He even setup a simple takeoff and approach into Toronto and let me fly the aircraft manually for a bit. As I pilot the 737 mostly, I called out what I needed, and Luigi dutifully took care of FO actions such as flaps, gear, and overhead work. Thank you for that. I landed the plane alright, if a little short of threshold, as the 777 cockpit sits a lot higher than my 737 I am used to and I touched down early. Sight picture matters!

I do want to extend a huge compliment to uFly and their staff for the warm welcome and use of their time. The visit didn’t cost me anything and they went above and beyond what I ever expected. If any of you get a chance to try their simulator, you should.

2 thoughts on “A Visit to Toronto – uFly Simulator”